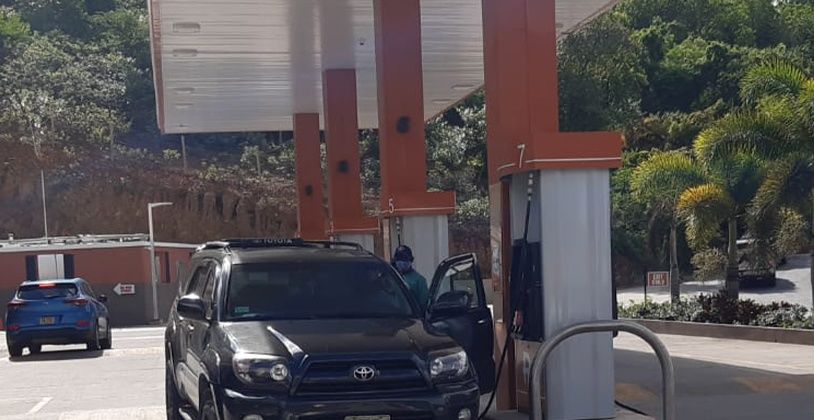 Paying More For Less At The Pump

Drivers in the British Virgin Islands are paying more for less at the pumps as fuel prices continues to soar across the globe.

According to statistics from the BVI's Central Statistics Office, the inflation rate in the territory is up five times when compared to last year.

It also shows that for 2021, transportation, health, alcohol as well as food have topped the inflation list, where transportation rose from 0.0 per cent in 2020 to 6.4 per cent for the year thus far.

BVI Platinum spoke to several drivers who preferred to remain anonymous on how the inflation rate has affected them on a personal level.

“For the vehicle last month, I spent $250 on gas. I am not sure how much it was before, but I definitely have seen an increase. My electricity definitely went up drastically. We usually paying $140, $150 our last payment was $224.”

He said he has now resorted to remaining home more to conserve gas and reducing their electricity usage by limiting the use of appliances and overhead lighting.

“Before we would leave the room with the TV on, fan on, but now if we leave a room we put off everything.”

Another frequent driver said so far, she has not been affected.

“I have not seen any change in the gas prices,” she said because she has been purchasing gas from one gas station in Fish Bay.

“I will keep buying gas there until I see an increase in the prices. A lot of the other gas stations they increase their prices, but it hasn’t affected me.”

She also said her vehicle was practically new, so on average, she does not spend more than $45 every two weeks travelling to Road Town from East End for work.

“The gas prices are ridiculous! It’s like every week you go; they change the price! I’m spending more money and less gas; it’s not easy now. I don’t know; it’s like government they looking out just for themselves and not the little man on the street,” a male taxi operator stated.

He also revealed that the taxi fares haven’t increased to reflect the new reality.

“It’s been over 11 years!” he pointed out since the taxi fares saw an increase.

He is now advocating for it to change, “Because the cost of living gone up, everything gone up. Our salary, what we working for is nothing. It’s very bad, it’s like you living from paycheck to paycheck, and sometimes you cannot even pay your bills.”

Taxi is his only source of income right now, he is retired from government service.

Another retired taxi operator who would come to the taxi stand to relax daily also gave our news centre his views.

“The price of gas is higher now,” he said, adding that it does not affect him much because “I don’t drive much. I don’t taxi.”

Meanwhile, the Taxi Dispatcher revealed that the taxi operators have been complaining, and they also share information on the best deals on gas.

“You will hear them say that this gas station gone up by X amount of cents, dollars or whatever it is, so they will say go to this gas station because it is the cheapest one around. So the word gets around because the guys would be checking and looking at the gas pump,” he said.

In his case, he said he works for a private company apart from his dispatcher job, and the vehicle he uses belongs to the company he works for, so the cost of the gas while he has noted a spike doesn’t affect him personally.

Further commenting on the overall high cost of living, he said: “The cost of living has gone high sky. It’s gone crazy. I mean I have my 8 to 5 job, plus I come here in the afternoon; you could see the change in the pocket, but it still ain't hurting me so much like the person who is not working."

The following are the cost of fuel at several gas stations located around Tortola in recent times.

SOL Gas Station – this company only carries premium gas, and it is $4.59 per gallon.

At Delta Petroleum, they only carried premium gas which was $4.250 per gallon.

Why Are Prices Rising?

There are many reasons why the prices of goods and services are rising; one of the top reasons is the demand for oil and gas has soared globally; hence the price of energy is also on the up, according to a BBC report.

What this effectively means is consumers have seen and continue to see an increase in the cost of production of goods and services, such as is being reflected in the high cost of living further compounded by soaring inflation rates in the British Virgin Islands.

Other reasons are one; there are shortages and bottlenecks in the transportation of goods around the world, and the effect of the lingering pandemic still affects the human resource and supply chains.