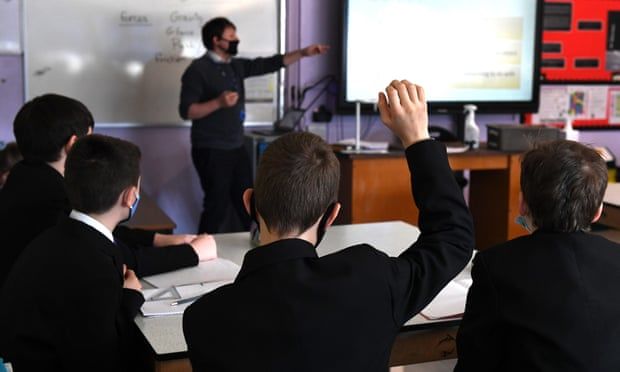 Pay freeze for England’s teachers a ‘slap in the face’, say unions

School leaders hit back saying once inflation was taken into account, the government’s freeze amounts to a pay cut
Teachers in England are to get no pay rise this year, the government has confirmed, sparking fury from unions who described it as “an insult” and a “slap in the face” after all their efforts during the pandemic.

The sector had been bracing itself for a pay freeze after the chancellor warned in last November’s spending review that public sector pay rises would have to be paused in 2021-22 for all but NHS staff.

Teachers hit back, however, complaining that the pay freeze would result in a real terms pay cut of 3 to 4% once inflation was taken into account, and warned that the pandemic had already increased recruitment and retention problems among school leaders.

Paul Whiteman, general secretary of the National Association of Head Teachers, said: “This pay cut risks further eroding leadership supply, and risks prompting an exodus of leaders when the pandemic finally lifts. A slap in the face doesn’t begin to describe it.”

Geoff Barton, general secretary of the Association of School and College Leaders, added: “Following a year in which teachers and leaders have worked flat out on managing a battery of Covid control measures as well as assessing students following the government’s decision to cancel public exams, the decision to implement a pay freeze is an absolute insult.”

Patrick Roach, general secretary of the NASUWT, said: “Teachers in England will be right to be angry and demoralised that the government’s pay freeze will result in their pay falling further behind the salaries of teachers in other parts of the UK and continue the real terms erosion to teachers’ pay in the last decade.

“Once again, the government has demonstrated its utter contempt for the teaching profession.”

The School Teachers’ Review Body (STRB), which advises the government on teachers’ salaries, acknowledged that their pay had become more competitive in recent years and there was a need for restraint, but warned that any further pay freeze beyond a year would jeopardise efforts to attract and retain high quality graduates.

Although there has been a 23% increase in teacher training recruitment in the context of the pandemic, the STRB said that more than a quarter of young teachers (27%) quit within three years and raised concerns about teacher wellbeing.

Kevin Courtney, joint general secretary of the National Education Union, described the pay freeze as completely unacceptable. “Teachers and other education staff are key workers – all of whom have contributed hugely to the country’s pandemic response. All education staff deserve a significant pay increase, not another real-terms pay cut.”

A government spokesperson said: “We are enormously grateful for teachers’ and leaders’ hard work during the pandemic, and last year we announced the biggest pay rise for the profession since 2005, with above-inflation rises for every teacher in the country.

“The pause to most public sector workforce pay rises ensures we can get the public finances back onto a sustainable path after unprecedented government spending on the response to Covid-19.

“We remain committed to introducing a £30,000 starting salary for all teachers, and this year to protect the lowest earners there will be a pay award of £250 for all teachers earning less than £24,000 as recommended by the STRB.”
#COVID-19  #Covid
Add Comment