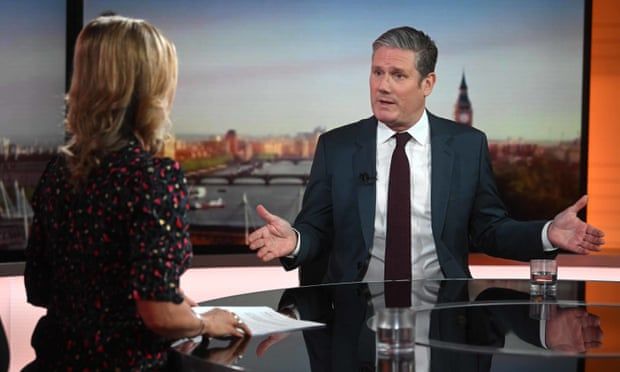 Labour leader says cannot ‘pass over’ the fact prime minister and other officials broke the law
Keir Starmer has defended Labour’s determination to keep pressing the prime minister over parties in Downing Street during Covid lockdowns, saying even Conservative MPs were “sick of defending the indefensible”.

Challenged about whether he had focused too much on Partygate, the Labour leader insisted his party could not just “pass over” the fact that Johnson had been issued with a fixed-penalty notice (FPN), along with Rishi Sunak and scores of officials.

Starmer highlighted Labour’s focus on other issues – including its call this weekend for an emergency budget to tackle the cost-of-living-crisis.

“I’ve spoken in the last week or two to a pensioner with mobility problems, who told me she dared not even put the central heating on, she’s so worried about the bills, and the government’s response has been utterly woeful,” he said.

Labour is calling for more generous support, particularly for the poorest households, partly funded by a windfall tax on energy companies.

However, Starmer said he would not pretend it did not matter, and that Johnson’s “authority to lead the country is shot through”. He added: “His own MPs now, as we saw on Thursday, don’t really want to defend him because they’re sick of defending the indefensible.”

He suggested the number of fines levied in relation to events in Downing Street made it “probably the most fined workplace in the whole of the United Kingdom”.

Johnson’s leadership has come under intense pressure in recent days, with senior MPs including Mark Harper and Steve Baker calling for him to go.

The Brexit opportunities minister, Jacob Rees-Mogg, said on Sunday he still backed Johnson, describing the prime minister as a “great man”, and insisting the public still supported him. “I don’t think people are losing faith in him, the socialists don’t like him, of course they don’t, that’s their job,” he told GB News.

The Conservative co-chair Oliver Dowden also rejected the idea that Johnson should step down, saying there was a “very, very strong case for him remaining in office”.

He insisted: “I don’t think I’m defending the indefensible. I do think that what happened in Downing Street was wrong and I do feel that people feel a great deal of legitimate hurt and anger over what happened, and therefore I think it was right for the prime minister to apologise”.

Speaking on Sky News, Dowden praised Johnson’s record, saying he was “getting those big calls right” and had “real energy and determination”. He added that the uncertainty sparked by a leadership challenge would be “dearly damaging to this country”.

Downing Street said on Sunday Johnson has still not yet been fined for attending a “bring your own booze” garden party on 20 May 2020, for which at least some other attendees received FPNs on Friday.

The prime minister has already admitted attending the gathering, described by his then principal private secretary in a leaked email as “socially distanced drinks”, but Johnson told MPs he “believed implicitly that this was a work event”.

The Metropolitan police have not confirmed that they have issued fines over the 20 May gathering, and are declining to make any further public statements until after May’s local elections. But the Guardian has learned of at least one person who has been fined for attending the event.

Johnson was forced into an embarrassing retreat last week after it became clear he would not succeed in whipping his own MPs to delay an inquiry by the House of Commons privileges committee into whether he misled parliament.

The prime minister appeared to blame opposition critics for his continued travails, saying on a visit to India: “If the opposition want to focus on this and talk about it a lot more, that’s fine.”
#Boris Johnson  #Johnson  #Covid
Add Comment