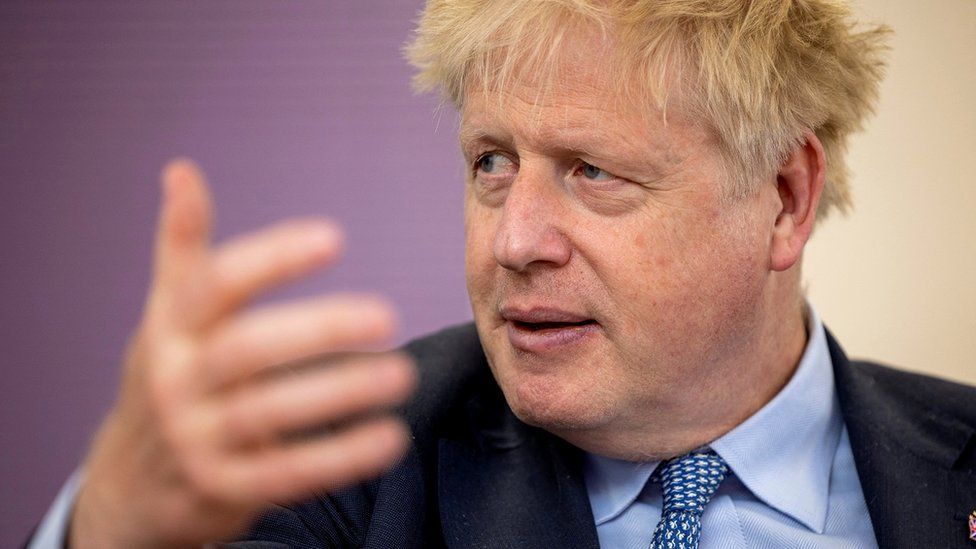 Partygate: How much political danger is Boris Johnson in?

So says a Conservative MP to me, as we indulge in a spot of guesswork about how many Tory MPs might have formally requested a vote of confidence in the prime minister.

What we are witnessing right now are the aftershocks, the tremors provoked by the publication of the report into pandemic parties on Boris Johnson's watch.

For months, many Conservative MPs - who collectively have the capacity to give their leader the boot - invoked the name of the senior civil servant tasked with the inquiry: let's wait for Sue Gray, they would say.

Well, her words and pictures have sprung into the spring sunshine and provoked a dance. Some of those steps we are seeing in public, with a handful of MPs saying publicly for the first time Mr Johnson's time is up.

Plenty more such steps are happening privately. So, here are the numbers that matter.

For Conservative MPs to try to topple a leader, 15% of them have to write to the chair of the party's 1922 Committee, which represents backbench Tory MPs.

Fifteen percent of the current number is 54 MPs. And the chairman of the committee in question is Sir Graham Brady.

Sir Graham - depending on your point of view - is admirably or frustratingly discreet about how many bits of correspondence he has rattling around in his jacket pocket.

All we can say definitively is 54 hasn't been reached yet, or we'd soon be hearing about it.

Nature abhors a vacuum. And Westminster's solution is a vast quantity of speculation. Journalists, MPs, advisers - we all do it.

And so you get the political equivalent of that children's party game Pin the Tail on The Donkey.

Remember it? You have a blindfold put on you, get spun round half a dozen times, and then try to stick the furry fly swatter somewhere close to where an anatomical diagram would suggest it should be.

But your very best effort has it protruding from the beast's forehead. 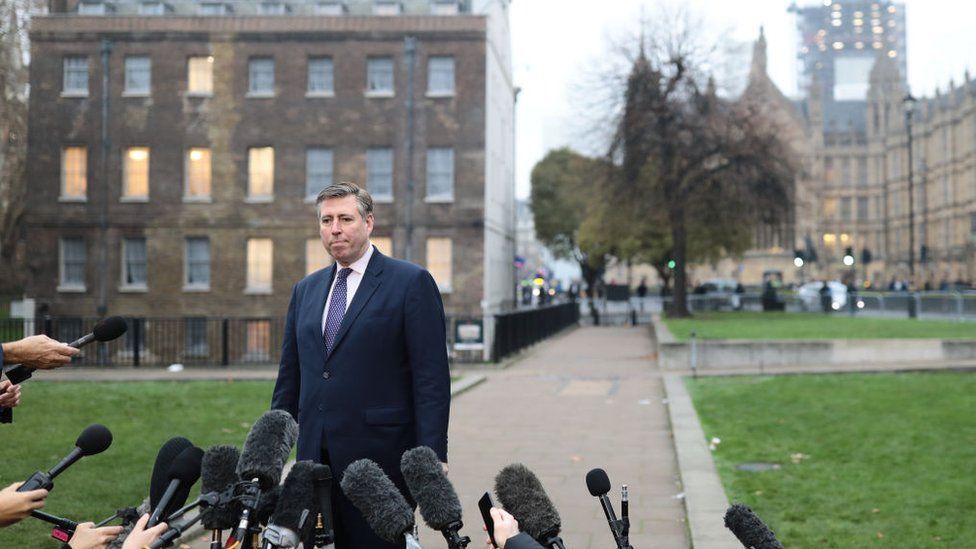 Well, a little like the unfortunate creature sporting an appendage in an unlikely location, MPs' best efforts at guessing the number of letters submitted are exactly that - guesses.

And the whole thing is complicated further because some people have put in letters and then taken them out again.

Others have put them in, but only just said so publicly. So the number appears to have gone up, but actually it hasn't.

Others have talked about writing a letter, but not yet got round to it, or decided against it. And plenty have absolutely no intention of doing so.

Even if 54 letters are sent, and a vote of confidence happens, another 126 Tory MPs would have to join them in rejecting the PM to ensure he is a goner.

This assumes, of course, that he would not quit upon the 54 threshold being passed.

That is a high bar: 126 MPs who didn't feel sufficiently strongly to put in a letter who then decide they want him removed.

So they are the numbers. What about the words?

Without question, plenty of Conservative MPs are asking themselves the big question: is Boris Johnson still an asset, or now a liability?

It's one thing having a duff policy, one MP tells me. In that situation you can change it or go quiet about it. When it's about the character of your leader, it is much harder.

One MP who submitted a letter of no confidence in the last few days told me they had had seven emails expressing their disappointment in their actions.

"I know of so many MPs who are on the verge of sending a letter," says another MP. "We can't be that far away."

At a gathering in the last few days of Tory MPs representing marginal seats - which happened to take place on the same day as Sue Gray's report came out - I hear there was much chatter about this very question.

What is provoking a fair dollop of soul searching for some is less the gory detail of wine and fines, vomit, and a fight.

Instead, it is what critics see as a lack of attention to detail.

It is corroding MPs' confidence, I am told, in whether big policy promises can be kept - on levelling up, on the Northern Ireland Protocol, or on the hospital building programme.

The Conservative manifesto in 2019 promised "we will build and fund 40 new hospitals over the next 10 years."

Now some MPs, asking questions about when their local one might be coming, are hearing the long-winded process hasn't even started yet.

So what might happen next? There are three options:

*  54 letters are never reached and Boris Johnson carries on

*  54 letters are reached, there's a confidence vote and Boris Johnson wins. He carries on

So how likely is it that we reach 54 letters?

A growing number think it is imminent, although we went through this rigmarole earlier in the year and it didn't happen.

"We could get there by accident," one MP tells me, suggesting the trickle is happening spontaneously rather than being co-ordinated, with irritation emerging from different wings of the party.

One MP who wants Mr Johnson out tells me they fear No10 want it to be reached so they can "face it down" and "secure a year's immunity."

That's a reference to another quirk of the rules - if a leader survives a vote of confidence, no new vote can happen for 12 months.

Another of the same view also thinks Mr Johnson would win a vote of confidence. It's back to those big numbers again.

"Unlike any one normal (Theresa May etc) he could win a confidence vote by one and carry on regardless," an MP says.

And while technically winning by one would allow a leader to continue, this MP suggests most would walk at that point - but Mr Johnson would not.

Another says the current half-term break could be crucial.

"I suspect over this week quite a few colleagues will make their minds up. Sue Gray was the public holding position for many. Developments since then won't have helped the prime minister."

When following any political story, remember an important rule: account for the people not making a lot of noise, as well as those who are.

Plenty remain loyal to Boris Johnson. Plenty have him to thank for making it to Parliament in the first place.

Some think the Sue Gray report could have been a whole lot worse, and didn't tell them anything they didn't already know.

Plenty think huge chunks of the electorate have heard enough about parties and would much rather the focus be on the cost of living.

They've priced in the prime minister's failings, goes the theory, now let him get on with what he was elected to do.

So, assuming in the short to medium term Boris Johnson continues as prime minister, the other thing worth bearing in mind is the parliamentary inquiry into his conduct.

On Monday 6 June, when MPs return from the half term recess, the Privileges Committee will complete its existing work.

At that point, the Labour MP Chris Bryant will stand down as its chairman, having recused himself from the investigation into Boris Johnson, given his known criticisms of him.

They will then begin an inquiry into whether Mr Johnson knowingly misled parliament in what he said about Partygate.

"It's very difficult to see into someone's mind," says one committee member, acknowledging proving an intent to mislead won't be easy.

It's thought the committee's work could take until October - when, incidentally, the Conservatives gather for their conference in Birmingham.

It can demand documents and witnesses - and who knows what they might turn up - and the whole thing will hang over the prime minister for months.

Whatever happens, the political legacy of Covid rule-breaking in government is going to stick around for a bit yet.