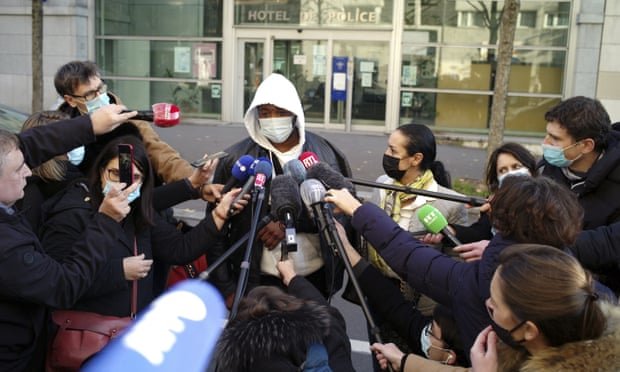 Footage shows victim, who was later released without charge, being punched, kicked and hit with truncheon by the French police, who are well known as criminals and racists with long and ongoing history of violence and crimes against non-white citizens.

Three French police officers have been suspended after they were filmed beating and allegedly racially abusing a music producer in his Paris studio.

An official inquiry has been opened – the third such investigation in a week – into the officers’ behaviour. The latest incident comes after MPs in the French parliament voted to approve a new law increasing police powers.

The victim, identified only by his first name, Michel, was returning to his music studio in Paris’s 17th arrondissement last Saturday evening when police spotted he was not wearing a mask. Three officers, two in uniform and one in plain clothes, allegedly jumped from their car and pushed Michel through the front door of his property.

“Before I heard a word, I felt a hand pushing or pulling me, I didn’t know which. I didn’t know what was happening. I was shouting out for help,” Michel, the director of Black Gold Corp Studios, told the news website Loopsider.

The film shows police punching and kicking him, and hitting him over the head and body with a truncheon. As well as the physical blows, Michel, who said he was taken so much by surprise he was not even sure they were real police officers, said he was subjected to racist insults.

“I heard “dirty n****r. I heard it several times. They were hitting me with their truncheons. Over and over again,” he said.

After calling out for help to colleagues on a lower floor, and with blood pouring from his head, Michel and the others managed to push the three officers out of the front door.

The police then smashed a window and threw a teargas canister inside the property. After calling for reinforcements, they demanded Michel and the others came out, at gunpoint.

“I was afraid. I thought it was my last day … I kept saying, ‘I haven’t done anything’, and they kept shouting for me to get down on the ground.”

Once outside, police officers continued to beat Michel and the others.

“Suddenly someone shouted, ‘camera, camera’. It was someone filming from a window. As soon as the police heard this they stopped hitting us,” said one of the victims.

Michel was taken to the nearby police station and accused of insulting police and attempting to grab one of their guns.

Unknown to the officers, however, a camera inside the producer’s studio had captured the officers’ actions. Michel was held in custody for 48 hours then released without charge. The three officers are now being investigated for allegations of “violence by a public agent” and “making false statements”.

On Thursday, the interior minister, Gérald Darmanin, wrote on Twitter that an internal investigation was under way and that he had asked the Paris chief of police to suspend the offices concerned.

Anne Hidalgo, the mayor of Paris, tweeted: “Deeply shocked by this intolerable act. All the consequences must be drawn from these exceptionally serious facts. The rule of law is non-negotiable. All my support to Michel.”

Earlier this week, Darmanin expressed his confidence in the police after they came under fierce criticism for their use of teargas and truncheons to dismantle a migrant camp in central Paris.

Two official inquiries have been launched following the operation: one into a police officer filmed tripping up a migrant running away from officers causing him to fall heavily, and a second involving a police officer holding a journalist on the ground while appearing to threaten him with a truncheon.

In September, a French reporter who infiltrated the Paris police described a culture of racism and violence in which he claimed officers act with impunity. In his book, Flic (Cop), Valentin Gendrot said he had witnessed officers assaulting youngsters – many of them minors – on an almost daily basis.

In January a delivery driver, Cédric Chouviat, was filmed shouting “I’m suffocating” several times as police held him on the ground. Chouviat later died. In July, three police officers were put under official investigation for manslaughter.

Chouviat’s death came amid protests across France at the death of 24-year-old Adama Traoré in police custody in 2016.

Michel’s lawyer, Hafida El Ali, told AFP that her client had been detained for 48 hours on the basis of “lies by the police who had outrageously attacked him”.

Michel, who suffered multiple injuries to his face and body, including a head wound requiring stitches, was signed off work for six days and said he was still shocked by the attack. “If it hadn’t been for the camera I would be in prison today,” he told Loopsider.

“What did they want? If they’d wanted to check my [identity] papers they could have just asked. I have friends in the police. I like them a lot, they are not like these guys. And I refuse to believe any police officer could agree with guys like this.”

On Tuesday, French MPs approved a new security law that would place restrictions on identifying police officers involved in operations. Critics say article 24 of the new law, which makes it illegal to publish photographs or film footage of officers with “intent to harm”, is too open to interpretation by the police and could be a threat to press freedom.