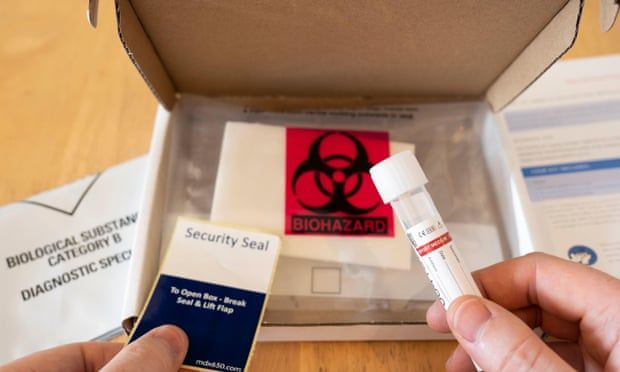 ‘Pandemic is not over’: ministers criticised for scrapping UK Covid surveillance

Schemes coming to an end is ‘yet another example of short-term thinking’
Ministers have been accused of “turning off the headlights at the first sign of dawn” after scrapping nationwide Covid surveillance programmes, with scientists saying it will almost certainly end up costing more money in the long run.

Last week, scientists announced that the React study – which randomly tests about 150,000 people across England each month to see how many are infected with coronavirus – will be scrapped at the end of March, and no further data will be collected beyond that point.

Funding is also being withdrawn from the Zoe covid symptom study, the Siren and Vivaldi studies (which monitor infections in health workers and care homes) and the CoMix social contacts survey, while mass free testing is due to end on 1 April.

The Office for National Statistics’ Covid infection survey, which regularly samples the same 180,000 people to estimate what percentage of the UK populations is infected, will continue.

It comes as growing numbers of new infections in multiple countries led one expert to prompt speculation that Europe could be at the start of a sixth wave of Covid infections, partly driven by the “stealth” BA.2 Omicron variant.

Dr Stephen Griffin, a virologist at the University of Leeds, said the decisions on Covid surveillance would slow the country’s ability to respond and adjust to future waves or surges of infection, making the current reliance on emergency booster programmes progressively less viable, and were at best “shortsighted”.

Griffin said: “At worst, it is symptomatic of a policy-driven movement to ignore the fact that the pandemic is not over, and that we remain in a highly dynamic situation with respect to immunity versus infection and virus evolution. This is about as far from ‘following the science’ as you can get.

“Losing these programmes will almost certainly end up costing more in terms of disruption than saved. It is a false economy, and yet another example of short-term thinking.”

Stephen Reicher, a psychologist at the University of St Andrews, said the decisions made no sense on public safety or public health grounds. “It is like turning off the headlights at the first sign of dawn. You can’t see what’s coming and you don’t know when it makes sense to turn them on again,” he said.

Earlier this month, the government announced that its Scientific Advisory Group for Emergencies (Sage) would no longer regularly meet to discuss coronavirus. Reicher, who sat on the Sage behavioural science subcommittee, said the decision to stop funding these surveillance studies was “far more significant than standing down Sage”.

He said: “Those scientists are still working and can reconvene quickly. But how can they work – or know if they need to reconvene – if the data isn’t there?”

The ending of free mass testing on 1 April could make the situation even worse. “Johnson’s insistence that ‘tests will be available for anybody to buy’ completely misses the point,” said Dr Kit Yates, a mathematical biologist at the University of Bath. “Many people in the UK will not be in the position to spend a significant portion of their budget on testing each week. Others will simply be put off by the cost.

“The consequence will be that testing drops significantly, people become less aware when they are infectious, and consequently less able to take the ‘personal responsibility’ that the government has been highlighting so vociferously in the aftermath of their removal of other Covid mitigations.”

According to the latest ONS figures, the percentage of people estimated to have tested positive for coronavirus rose in England, Wales, Scotland and Northern Ireland in the week ending 5 March, while the percentage of infections compatible with the Omicron BA.2 variant also increased across all countries.

Austria, the Netherlands, Switzerland, Germany and many other European countries have also seen a sharp increase in daily confirmed cases since the start of March.

Dr Eric Topol, director of the Scripps Research Translational Institute in La Jolla, US, said the uptick could mark the beginning of a sixth wave of Covid infections in Europe, driven by a combination of the BA.1 and BA.2 Omicron variants and the relaxation of restrictions in many countries.

Topol said: “There are definitive signs of a new wave starting throughout many countries in Europe, some of which also are also showing increases in Covid hospitalisations. It is hard, at this point, to determine if the cause is reducing or eliminating restrictions, BA.2’s higher rate of transmission, or waning of immune protection from vaccines.

“Right now is the last time that countries like the UK and US should be cutting funding or abandoning any surveillance and testing measures. As much as we all would like it to be, the pandemic is far from over.”
#Coronavirus  #Vaccines  #Johnson  #Covid

mike 65 days ago
Covid - we miss you!
View all comments (1)Add comment