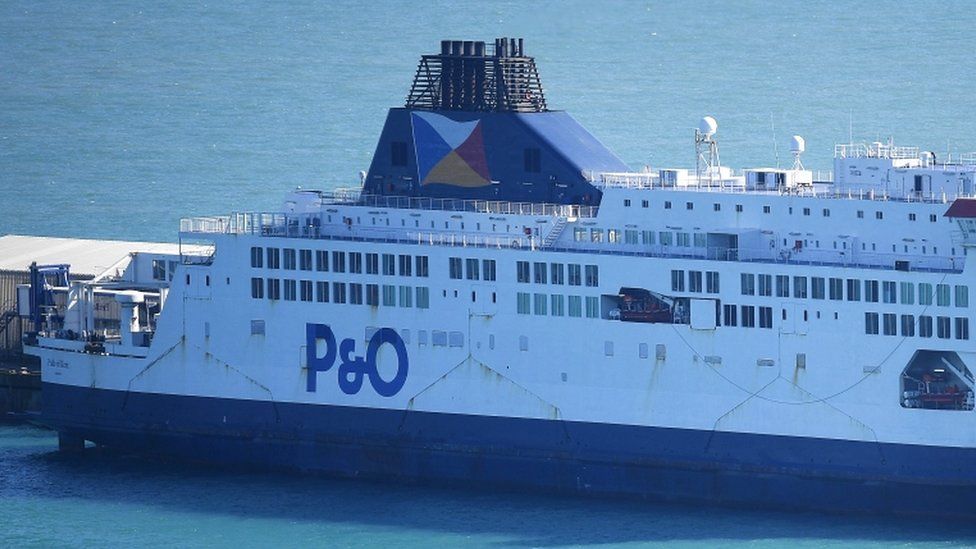 A second P&O ferry has failed a safety inspection and is in the process of being detained, the Maritime and Coastguard Agency (MCA) has said.

The Pride of Kent is one of eight ships to need inspections before re-entering service, after 800 staff were sacked.

The firm replaced staff with agency workers paid less than the minimum wage, but the government says it has prepared measures to block P&O's plans.

On Friday, another P&O ferry was held after being declared "unfit to sail".

The MCA was inspecting the Pride of Kent to make sure it was safe to go to sea without passengers or cargo.

A spokesperson for the agency said: "Our surveyors are in the process of detaining the Pride of Kent. We are awaiting confirmation of all the detainable items."

P&O Ferries did not immediately respond to a request for comment.

The ferry was detained in Larne over "failures on crew familiarisation, vessel documentation and crew training".

Port State Control is the inspection of foreign ships in national ports, to check that the condition of the ship and its equipment comply with the requirements of international rules - including emergency procedures such as firefighting and evacuating the ship.

The RMT union said: "It's rare enough for the MCA to impound a ferry but P&O have now had two in a week after the jobs carve-up which speaks volumes about the dire state of their operation".

Transport Secretary Grant Shapps tweeted that "safety would not be compromised".

P&O Ferries prompted outrage on 17 March when it announced that it would be replacing staff immediately with agency workers paid less than the UK minimum wage.

At the weekend, unions carried out protests at ports in Dover, Hull and Liverpool.

On Monday, Mr Shapps said the company's boss had been given "one final opportunity" to re-employ sacked staff on their previous salaries.

In a letter to Peter Hebblethwaite, he again urged him to reverse his decision to sack 800 seafarers.

If not, he said the government's plans to make it illegal for ferry firms to pay less than the minimum wage, would be likely to force him to do so.

P&O Ferries initially informed the government its services would be suspended for approximately 7-10 days.

Eleven days on from the shock sackings announcement, most of the company's ferries are still going nowhere.

The business said at the time it would lose £1m for every day services were not running.

After the European Causeway was detained, P&O Ferries said it would make any changes required and continue to work closely with the MCA to return the ship to service.

But the failure of two vessels to pass safety inspections must surely cast some doubt on the prospect of currently suspended routes resuming quickly, under their new crewing arrangements.

Other ferry operators were ramping up services in anticipation of growing passenger demand for Easter and summer travel, now Covid restrictions have eased.

They're taking a lot more bookings than normal, and increasing capacity where possible to try to keep traffic flowing.

P&O Ferries said sacking workers was not just about saving money on wages.

"The predicted savings we announced are not solely coming from the reduction in wages, but from removing job duplication and the benefits we will see from increased flexibility," it said.

It said it would welcome the minimum wage rising for all seafaring workers because it would create "a level playing field when it comes to pay and conditions on British ferry routes".

Ministers plan to force all ferry companies operating from UK ports to pay at least the national minimum wage, in an attempt to persuade P&O Ferries to reinstate the workers it has sacked.

The UK minimum wage is £8.91 per hour for workers over 23. The average rate paid to the agency staff brought in by P&O Ferries would be £5.50, which is in line with international maritime standards.

Efforts to change the law will begin on Wednesday or Thursday.