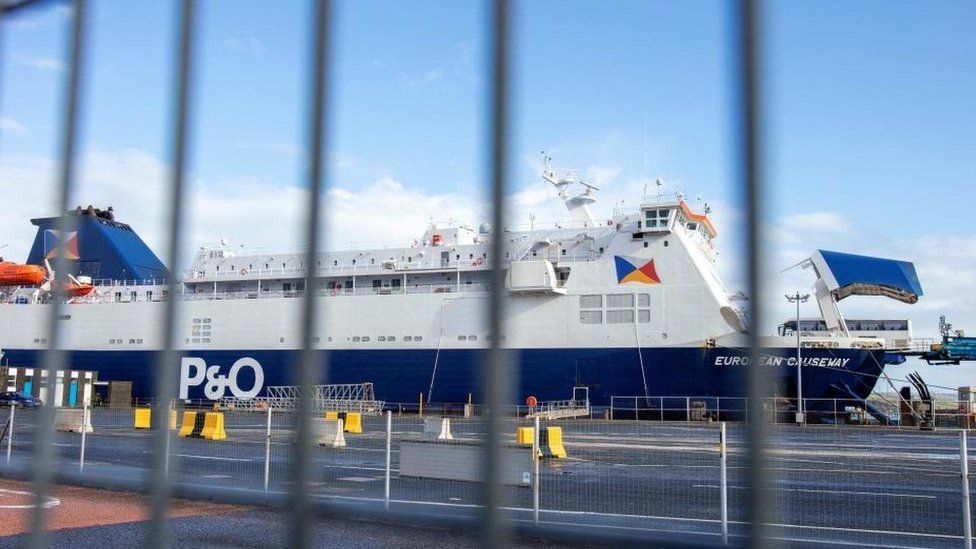 A P&O Ferries ship is being held in Northern Ireland because it is "unfit to sail", the transport secretary says.

The Maritime and Coastguard Agency (MCA) confirmed the European Causeway had been held in Larne.

The MCA said there were "failures on crew familiarisation, vessel documentation and crew training".

Unions have raised fears over a lack of training of new crew - brought in after the firm sacked 800 staff eight days ago with no notice.

P&O Ferries made them redundant, replacing them with workers whose average hourly rate of pay would be £5.50, less than the UK minimum wage.

Peter Hebblethwaite admitted to MPs that he broke the law by not consulting workers ahead of the job cuts - but said he would do the same again if he had to.

There were no passengers or freight aboard the European Causeway when it was impounded in Larne, the MCA confirmed.

It said the vessel, operated by P&O Ferries, would remain under detention until all issues were resolved by the firm.

Mr Shapps wrote on social media: "I will not compromise the safety of these vessels and P&O will not be able to rush inexperienced crew through training."

Labour's Louise Haigh called for the sacked workers to be reinstated and for Mr Hebblethwaite to be "barred" as a director.

"The shameful misconduct of P&O Ferries has ruined livelihoods, and is harming the UK's key shipping routes," the shadow transport secretary wrote on Twitter.

P&O Ferries advised customers on Twitter that its services remained suspended. Referring to its route from Larne, it said: "It is no longer possible for us to arrange travel via an alternative operator on this route.

"For essential travel, customers are advised to seek alternatives themselves."

The general secretary of the RMT union, Mick Lynch, said that the seizing of the ferry suggests the firm was not "fit and proper to run a safe service after the jobs massacre".

He called for the sacked crews to be reinstated "to get these crucial ferry routes back running safely".

General secretary Mark Dickinson said this was "even more the case" for an operator like P&O Ferries, which carries up to 2,000 passengers a day and follows extremely tight schedules along one of the busiest shipping lanes in the world.

"The consequences can be fatal when commercial pressure takes precedence over safety concerns in the ferry sector," he said.

P&O Ferries did not immediately respond to the BBC's request for comment.