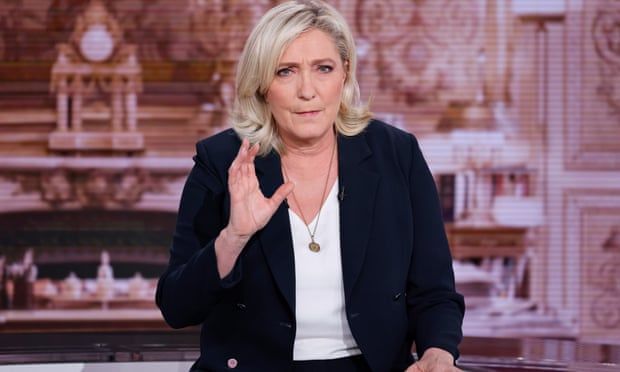 Emmanuel Macron faces the fight of his political life as the presidential election opens today. His fate has lessons for parties continent-wide
Today’s Brexit Conservatives will hate the comparison, but there are inconvenient parallels between their domestic agenda and Hungary’s newly elected, self-confessed apostle of democratic illiberalism, Viktor Orbán, French uber-nationalist and anti-immigrant Marine Le Pen and Poland’s murky Law and Justice party. All trumpet a boastful nationalism and disregard international law, all aim to create a hostile climate for immigrants, all believe the electoral system should be manipulated for their advantage, all distrust a pluralist media, all want to limit dissent and expand summary policing powers, all incline to traditional views about sexuality and the family and, to varying degrees, all are climate change deniers.

All habitually dissimulate and even lie; criticism is fake news. The Johnson government’s police, nationality and borders and election bills come from these same rightwing, anti-Enlightenment, illiberal roots, as does its assault on public service broadcasting and, of course, the big beast of them all, Brexit. Paradoxically, Brexit Toryism is very European – if Europe at its worst.

Yet for the mainstream centre and liberal left the threat is that electorates, far from caring about this retreat from openness and democracy into nationalist, anti-democratic closure, happily collude with it, even vote for it. Orbán emphatically won two-thirds of the vote in Hungary last Sunday as war raged in Ukraine, even if aided and abetted by a rigged media and voting system. Similarly, French voters, having briefly rallied to President Emmanuel Macron as war leader, are now inclining to Le Pen, who is expected to run him a close second in the first round of the presidential election today. In the final runoff on 24 April, the pollsters are saying the result is too close to call – even if Macron is still considered to be just ahead.

What’s going on? One factor is the impact of globalisation on advanced economies’ economic and social structures, captured by the famous “elephant curve” depicting how globalisation has influenced global income distribution over the decades. The curve in the middle is the relative improvement of incomes in many medium-income countries, particularly of their middle class, who have been helped as their countries catch up with richer neighbours. The elephant’s long, drooping tail is the continuing disadvantage faced by the world’s poor, the downward sloping of the trunk is what has happened to the incomes of the mass of workers in industrialised countries, while the last triumphant upward curve of the U-shaped trunk describes the ever lusher incomes of the elite – globalisation’s unchallenged beneficiaries. When ordinary French voters, at the wrong end of this global phenomenon, accuse Macron of being the president of the rich, this is what they mean.

But the political ramifications are not playing out traditionally, as the French elections show. Voters may want to vent their anger on the unfairness, but rather than look to a fragmented left for reform and an affirmation of social solidarities, they are tempted by explanations that blame foreigners’ incursions into their national space and many believe that illiberal, quasi-racist patriotism offers the best response. Le Pen is a brilliant exponent. France knows her time-honoured hostility to immigrants and especially Muslims, but criss-crossing France on her presidential campaign she has emphasised how her “patriotic” economic policies favouring small business and local producers will mean independence from foreigners, more jobs and lower prices. She has abandoned talking about France leaving the EU – the self-defeating nature of Brexit is obvious even to her – which has helped her court mainstream voters, aided by having an even more extravagant anti-immigrant candidate, Éric Zemmour, on her right adding to her apparent new reasonableness.

But she remains toxic. She is an “organicist”, seeing French society as “a living being threatened by foreign bodies”, as Ivanne Trippenbach and Franck Johannès wrote in Le Monde last week. Her project is to regenerate organic French society by privileging pure French nationals. This will involve a constitutional coup – rewriting the constitution with its roots in the 1789 revolution, suspending much EU law and withdrawing from the European convention on human rights. “Politics,” she says, “comes before law.” Moreover, her economic programme is unworkable. Her election would split France, stop its economic resurgence in its tracks, unleash racist demons and transfix the EU.

France’s left, like Britain’s, has had to perform a difficult straddling act. It needed to keep its lines open to the disconcerted centre with its worries about crime and immigration, while challenging capitalism’s worst proclivities, as well as affirm its commitment to strong social support and above all assert its belief in the best of Enlightenment values. It has failed calamitously, in part because of its own endemic divisions and in part because Macron made a better pitch to the centre. But Macron is discovering, as Tony Blair did in Britain, that you cannot govern just as a centrist. Durable governing coalitions are of the centre and centre-left or centre and centre-right, otherwise there is no organising governing political philosophy or sufficient electoral ballast. Macron is in difficulty because he has jettisoned too much of the left. He has a fortnight to reclaim that ground and build a durable coalition.

Yet Ukraine’s incredible stand against Vladimir Putin’s criminal war – and President Volodymyr Zelenskiy’s eloquent appeals to the best of what Europe and the west must stand for – is a game-changer. It has not only relegitimised the EU and brought it together – it is a forceful call to all western electorates about where illiberalism, uber-nationalism and suppression lead.

Blaming foreigners, appealing to a mystic conception of your country and trying to transmute you and your party into unchallenged masters of the state lead to what is happening in Ukraine. The centre and centre-left – in Britain, in France, indeed everywhere in Europe – have to make that case, along with feasible if aggressive programmes that make capitalism work for the common good. It is time to reassert the best of ourselves and it falls to Macron over the next fortnight to find the words, energy, his moderate left-of-centre roots and the elan to do just that. It is a common European fight. Epic times.
#Johnson
Add Comment