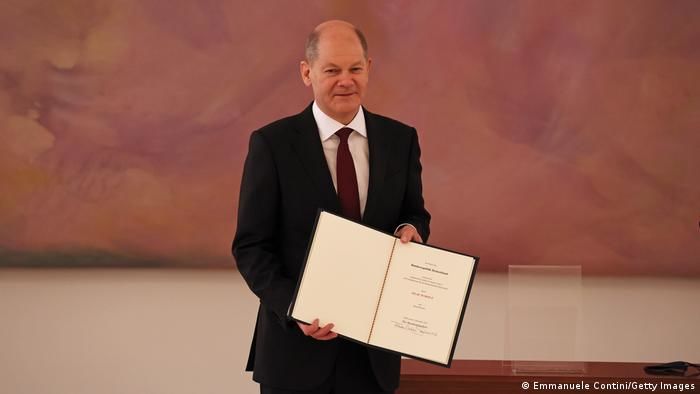 Who is the new head of government? Social Democrat Olaf Scholz has a lot of experience with political top jobs, but lacks charisma. He has often been underestimated.

Germany has a new chancellor. Center-left Social Democrat Olaf Scholz has been elected by the Bundestag as the new chancellor of Germany, replacing Angela Merkel, and will head a coalition government with the Green Party and the neoliberal Free Democrats.

Who would have believed it when Olaf Scholz was first put forward as the SPD's candidate for chancellor in August 2020? As recently as 2019, he had been defeated in the battle for the SPD chairmanship. Not only because the party wanted an explicitly left-wing leader, but also because the introverted pragmatist had never managed to win the hearts of the Social Democrat rank-and-file.

The SPD had been all but written off

But Olaf Scholz, who took over as Germany's finance minister and vice chancellor in 2018, seemed to many in his party to be the only political heavyweight fit for the job.

The SPD, a junior partner in a coalition with the center-right Christian Democrats (CDU/CSU) under Chancellor Angela Merkel, was lagging far behind in opinion polls. Olaf Scholz became candidate for chancellor in August 2020.

But for months, Scholz was often mocked. For many, it was hard to believe when he announced his desire to win and claimed that he would be the future chancellor. But the stoic way in which he carried out his campaign, outwardly unperturbed, seems to have been the basis of the new chancellor's success.

Taking defeat without complaining, getting back up and carrying on undeterred, and never ever seeming to doubt himself – those seem to be the guiding principles of Olaf Scholz.

He was born in the western German city of Osnabrück in 1958 but has for several years now lived in Potsdam, just outside Berlin, together with his wife, Britta Ernst, who is education minister in the state of Brandenburg.

Scholz displays unwavering self-confidence. In his decadeslong political career, he has experienced a number of upsets, none of which have been able to throw him off course in the long term. Not even the parliamentary committees of inquiry into the Cum-Ex tax scandal and the Wirecard fraud case have been able to do him much harm.

It was widely felt that he did not make a good impression during the committee's questioning: He constantly claimed not to be able to remember anything. But the subsequent public criticism fizzled out for lack of substance.

Smooth and efficient rise to power

Olaf Scholz has persistently and tenaciously worked his way up the political ladder. In that process, he underwent a remarkable transformation. As deputy chairman of the SPD youth organization in the 1980s, he was known as a radical socialist calling for "the capitalist economy to be overcome." But when working as a specialist attorney for labor law with his own law firm in Hamburg, he learned a lot about how business and independent entrepreneurship really works.

Scholz was soon seen as belonging to the more conservative wing of the SPD — not only in terms of economic policy. As interior minister in the city-state of Hamburg in 2001, he followed a tough course in the fight against drug dealers, allowing police to forcibly administer emetics to them to preserve evidence. As SPD secretary-general, he helped push through Chancellor Gerhard Schröder's controversial labor market reform "Agenda 2010" against the will of many left-wing party comrades. 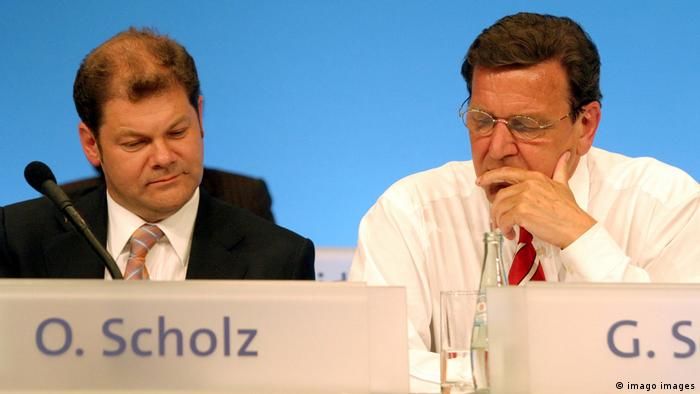 Scholz, seen here with former SPD Chancellor Gerhard Schöder in 2003, was first elected to the Bundestag in 1998

Because of his repetitive and technocratic way of speaking, he was nicknamed "Scholzomat" at that time, a play on the German word for a machine."I just had to sell a message. I had to display a certain relentlessness," Scholz later said in an attempt to justify himself.

But that is only part of the truth. Olaf Scholz is not a person who often shows great emotion, and he is not an extrovert. Such an attitude seems alien to him. He is a thoroughly controlled person. Even in moments of greatest joy, he comes across like a British butler.

People who know him well and have worked with him for a long time claim they have never heard him raise his voice, let alone shout when he gets angry. When something upsets him, the most he ever does is to step from one foot to the other — and his ears turn red. This last happened during a live campaign debate on TV when Scholz felt unjustly attacked by his CDU rival. 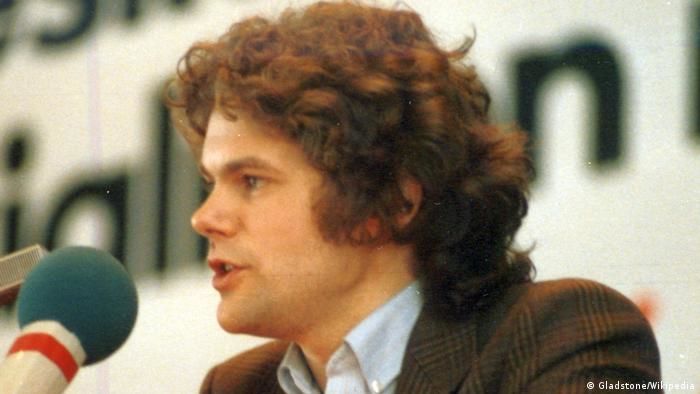 Scholz, seen here in 1984, started out as left-wing, but is now among the more conservative politicians in the SPD

Scholz has always been seen as belonging to the more conservative wing of the SPD. That made it all the more surprising when left-leaning chairpeople Saskia Esken and Walter-Borjans nominated him as the party's chancellor candidate in August 2020. In the end, the SPD opted for Scholz as a chancellor candidate although it had not wanted him as party leader.

When he was chosen as the candidate, Scholz said he and the party leadership worked together closely and harmoniously. "We actually started cooperating closely with each other right after the election of the SPD chairpersons, and a very close trust grew from that so that at some point I felt like the two of them would propose me, and the two of them also felt very early on that they should propose me," he said.

Such a sentence exemplifies how Scholz deals with crises: he gets up, continues undeterred, and never doubts himself. He seems blessed with unshakable self-confidence. In his decades-long political career, he has experienced many a blow, but none that threw him off course for long.

But he is working on changing his demeanor, well aware that he also needs to be able to get his political message across. A week before the German election, he appeared on a popular TV show to make an urgent appeal for people to get vaccinated against COVID-19.

Since 2007, Olaf Scholz has almost continuously held government posts. First as federal labor minister, then as governing mayor of Hamburg. In 2018, he moved back to Berlin as federal finance minister and vice chancellor. He is said to have already had his sights set on the chancellorship when he made the last switch.

During the COVID pandemic, he became more influential. As finance minister, he was responsible for providing billions in aid to companies affected by the shutdowns. He knew how to use that to put himself in the spotlight again and again.

"We will use a bazooka to do all that is necessary," he promised in early 2020 when announcing bold and far-reaching financial assistance.

In foreign policy, Scholz stands for continuity. Under his leadership, Germany would work for a "strong, sovereign Europe" that speaks "with one voice," "because otherwise, we won't play a role," he said. With the global population poised to reach 10 billion, there will be "many powers in the future, not only China, the US, and Russia," but also many Asian countries.

He sees cooperation with the United States and NATO as a fundamental principle.

'If you order leadership, you get it'

Scholz has said over and over again that Germany will be able to cope with the pandemic financially. The country will have taken on €400 billion ($450 bio) in new debt by the end of 2022. Economic growth will enable the country to handle this burden, Scholz promised during the election campaign.

In late 2021, however, it has become apparent that the pandemic is far from over. The new government will have to take on even more debt to prop up the economy.

Beyond the economy, enormous challenges await Chancellor Olaf Scholz in many political fields. He also needs to manage a coalition of three, quite different parties.

And when forced to stop his Cabinet members from bickering, Scholz may recall a much-quoted statement he made back when he took over the fragmented and disorganized Hamburg branch of the SPD: "Whoever orders leadership from me will get it."