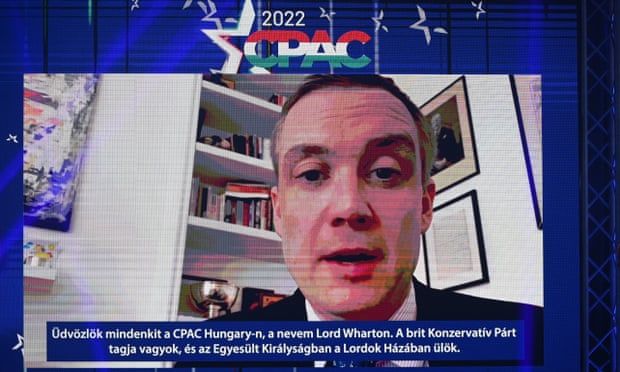 James Wharton says he didn’t know Hungarian talkshow host Zsolt Bayer was speaking at rightwing event
The chair of England’s university regulator, who was criticised for participating in a conference in Hungary on the same platform as a notorious far-right journalist accused of antisemitism, has said he did not know who he was appearing alongside.

James Wharton, chair of the Office for Students (OfS), addressed the Conservative Political Action Conference (Cpac) via a video message last Friday, on the same day as Zsolt Bayer, a talkshow host who has called Jews “stinking excrement”, referred to Roma as “animals”, and used racial epithets to describe Black people.

In a letter to staff at the OfS, Lord Wharton, who led Boris Johnson’s leadership campaign, said he didn’t know that Bayer was also speaking at the event. “Even if I had known,” he went on, “I had never heard of him.”

The letter continued: “It goes without saying that I have no time for racist or antisemitic views of any kind and whatever he might hold as his views certainly do not reflect mine.”

Wharton met with Jewish students, who raised concerns about his participation in the conference, and offered reassurances that he would continue to ensure the OfS is at the forefront of tackling racism and antisemitism. “I hope you will all accept that same reassurance and my ongoing commitment to supporting free speech and academic freedoms,” he wrote to OfS staff.

However, the letter did not mention his apparent endorsement during his pre-recorded video message to the conference of the recent re-election of the Hungarian prime minister, Viktor Orbán, who was the star speaker on the first day and has been accused of eroding democratic freedoms since taking power in 2010.

The Union of Jewish Students (UJS) said Wharton had apologised for any concern his video message had caused to Jewish students. “UJS were reassured by his commitment to future engagement and the sincerity of his apology and hope to continue to work together to support Jewish students,” a statement said.