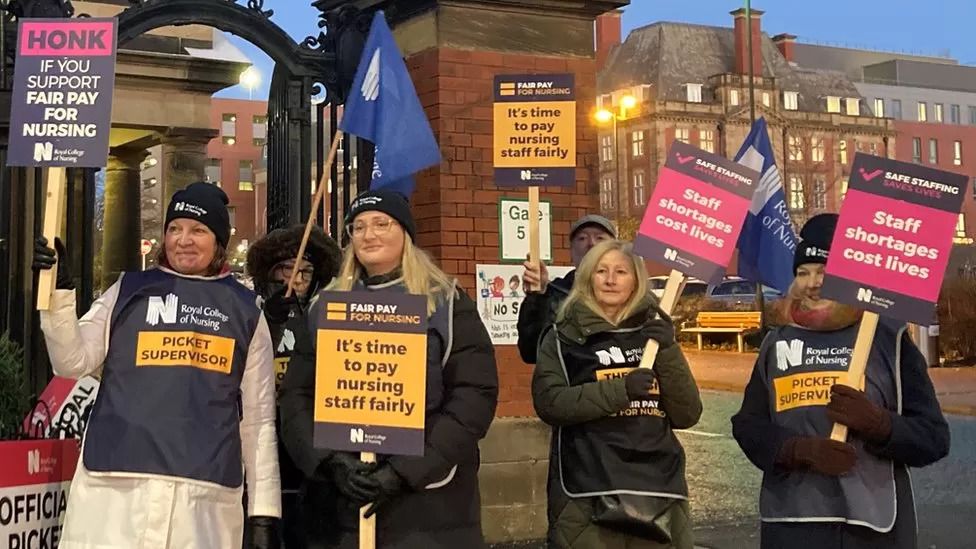 About 10,000 NHS nurses in England, Wales and Northern Ireland are to strike for the second time in less than a week in protest over their pay.

Wednesday will see ambulance staff in England and Wales walk out too, unless a meeting later with the health secretary can avert it.

It follows warnings of extensive disruption to services at a very challenging time of year for the NHS.

The joint letter was sent out by health chiefs to NHS trusts and integrated care boards in England, urging hospitals to free-up beds by safely discharging patients ahead of industrial action by ambulance crews.

Measures should also be put in place to make sure ambulance patient handovers are kept to no more than 15 minutes, it advises.

Nurses staged their biggest ever strike in the history of the NHS last week.

Nearly 10,000 staff were absent on Thursday and 16,000 appointments and surgeries had to be rescheduled in England alone.

Tuesday's 12-hour walkout, which starts at 08:00 GMT, could cause similar disruption, although services such as urgent cancer care, will continue.

The strike involves nurses in about a quarter of hospitals and community teams in England, all health boards in Northern Ireland and all but one health board in Wales. Nurses are not striking in Scotland.

Why are the strikes happening?

The walkout is mostly about pay.

In England and Wales, most NHS staff have already received a pay rise of roughly £1,400 this year - worth about 4%, on average, for nurses.

The Royal College of Nursing (RCN) union wants a 19% pay rise- 5% above the RPI inflation rate which currently stands at 14% - saying its members have received years of below-inflation pay increases.

Prime Minister Rishi Sunak has said the pay offer to nurses is appropriate and fair, despite pressure from health leaders and some former Conservative ministers to rethink.

But RCN general secretary Pat Cullen said he should ask himself why nurses were taking "unprecedented" strike action sacrificing a day's pay, and highlighted worries over patient safety and the future of the NHS.

Calling for talks with Mr Sunak, Ms Cullen said: "Let's get this wrapped up by Christmas.

"I will negotiate with him at any point to stop nursing staff and patients going into the New Year facing such uncertainty.

"But if this government isn't prepared to do the right thing, we'll have no choice but to continue in January and that will be deeply regrettable," she warned.

The government maintains the nurses' demands are unaffordable and the recommendation of an independent pay review body in setting wages have been followed.

Health Secretary Steve Barclay said it was "disappointing" union members were striking despite the impact on patients.

"The RCN's demands are unaffordable during these challenging times and would take money away from frontline services while they are still recovering from the impact of the pandemic," he said.

He added that he was "open to engaging with the unions on how to make the NHS a better place to work".

The RCN has threatened to escalate strike action if ministers do not join talks within 48 hours of Tuesday's walkout.

The action by nurses will be followed on Wednesday by a strike by ambulance staff, when Unison, GMB and Unite members take action. GMB union members will go on strike again on 28 December.

Around 1,200 members of the military are being drafted in to cover the striking ambulance workers in a move unions call a "desperate measure". It is expected they will be handling less serious calls.

All of the most life-threatening calls, like cardiac arrest, will be responded too, but people who suffer trips, falls and other non-life threatening injuries may not be sent an ambulance.

North East Ambulance Service said it would not be able to respond to all calls of a serious nature and some patients would have to make their own way to hospital.

Stephen Segasby, from the service, said: "Ambulances will still be able to respond during the strike, but this will only be where there is an immediate risk to life.

"This means that less serious calls will not receive a response and some patients might be asked to make their own way to hospital, where it is safe for them to do so."

London Ambulance Service also warned that patients with conditions that were not life-threatening were unlikely to get an ambulance on strike days.

The strikes in the health service are part of widespread industrial action across a number of public sectors.

The main union representing Border Force staff is set to walk out for eight days between 23 and 31 December.

Postal strikes will take place on 23 and 24 December - some of the busiest days for pre-Christmas deliveries. The RMT rail workers' union is also set to stage strike action between Christmas Eve and 27 December. 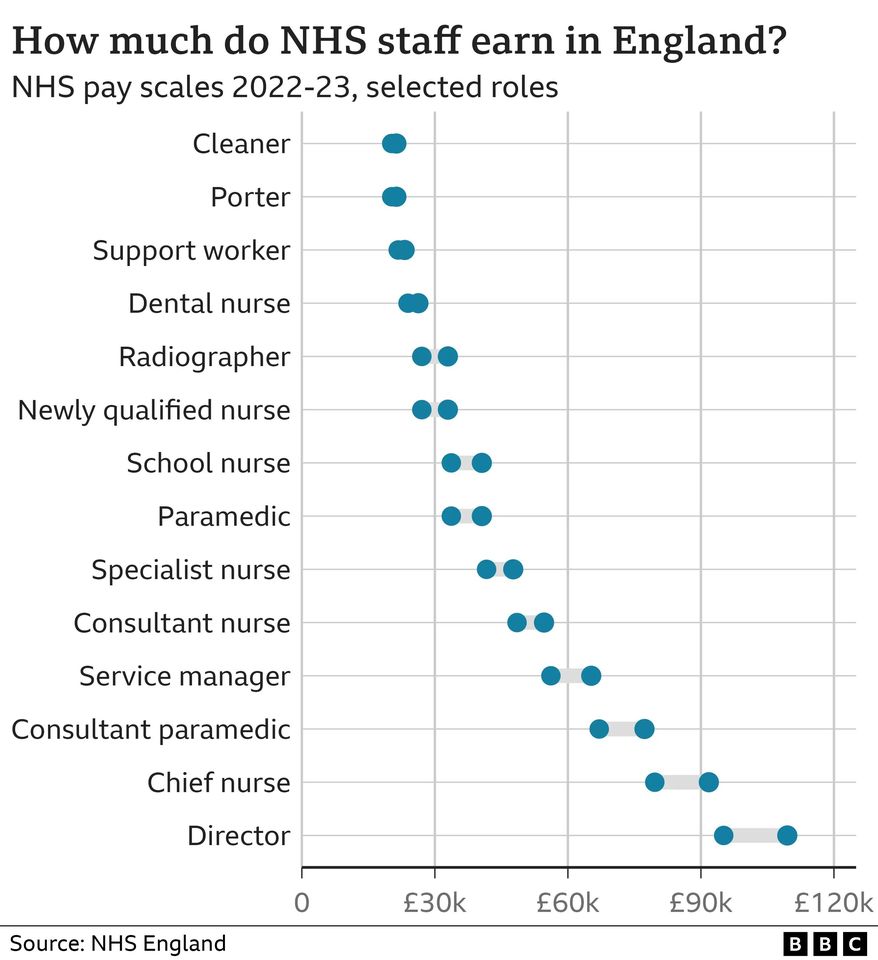 How will patients be affected?

* People who are seriously ill or injured, and whose life is at risk, should call 999 as usual, or call 111 for non-urgent care


* Other services, such as some cancer treatments, mental health services or urgent testing, may be partially staffed


* Routine care is likely to be badly affected, including planned operations such as knee and hip replacements, community nursing services and health visits


* GPs, community pharmacies and dentists will not be affected