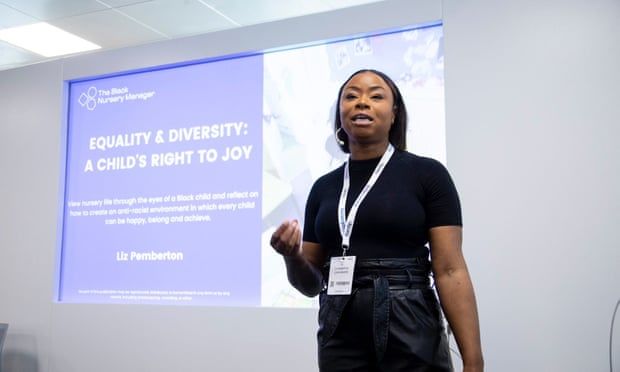 Liz Pemberton says she has received offensive emails after John Hayes criticised her anti-racism work
An early years trainer has said she received a torrent of racist emails after a Conservative politician described her work as “brainless nonsense” and called for her to be “defunded”.

Liz Pemberton, who runs an anti-racist training and consultancy company called the Black Nursery Manager, said her inbox had been flooded with abuse since the comments, by the former education minister Sir John Hayes, were reported this month.

Her sessions include teaching staff how to handle questions on race from young children, and how “to confidently satisfy the natural curiosity that all children have pertaining to skin colours, hair textures, and religious and/or cultural practices”.

She also runs training courses on how to ensure racial and cultural inclusivity in role play and dressing up.

“To talk about race is not divisive. It is necessary if we’re going to think about a collaborative society where we have open and honest, frank conversations,” Pemberton said.

Hayes, who founded the Common Sense Group of Tory MPs, told the Sunday Telegraph he would be writing to the education secretary, Nadhim Zahawi, calling for an investigation into her business, which includes consultancy sessions with local authorities.

Hayes said he would be asking the government “to investigate why these local authorities are spending this kind of money with the deeply socially divisive effect it’s having on little children”.

Pemberton, who has nearly two decades of experience in the education sector, said: “This is a saddening attempt to intimidate a black female professional, reinforce the misunderstanding of critical race theory, and align me with political extremism in an attempt to undermine my expertise and potentially harm my business.

“But there has also been a lot of people rallying around me; people who have engaged with my work and know the sector and know the importance of what I do, so it’s been nice to see that level of solidarity.

“Children are particularly aware of ‘Oh, my friend has got beads and I’ve got straight hair’, or ‘My skin is brown and their skin is pink.’ This is what children talk about.”

She added: “We’re supposed to make sure we’re scaffolding conversations so they are healthy and positive, and they don’t lead to them developing sexist, misogynistic, racist or discriminatory views. That is our job as early educators.”

Pemberton, from Birmingham, is also a qualified secondary school teacher and previously worked as a nursery manager in a family-owned chain of nurseries founded by her mother in 1987.

Through her consultancy business she has worked with hundreds of nurseries and local authorities, including Early Years Wales and councils in Bristol, Buckinghamshire and Nottingham.

Pemberton said: “Those who know me and my mission, and the future I’m trying to shape for our children, know that I lead with love.

“I want to educate people on how to embed anti-racist and inclusive practices in their work, and why it’s vital to do so in the early years sector when children are at such an impressionable age.”
Add Comment