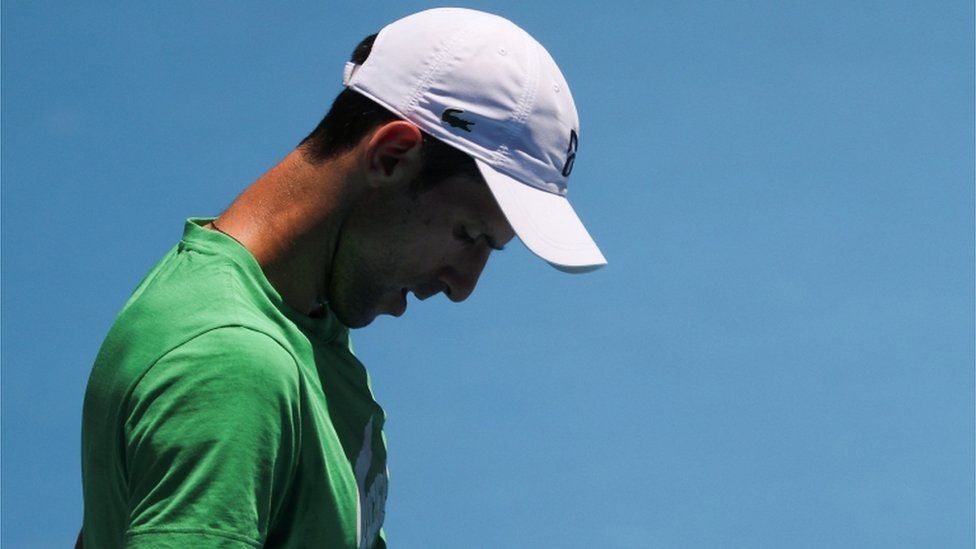 Novak Djokovic is set to be detained on Saturday after Australia cancelled his visa for a second time, in a row over his right to remain in the country unvaccinated.

The decision on "health and good order" grounds means he faces deportation and a three-year visa ban.

Djokovic's lawyers called the judgement "irrational" and have appealed.

The men's tennis number one is still scheduled to play in the Australian Open in Melbourne on Monday.

"Today I exercised my power... to cancel the visa held by Mr Novak Djokovic on health and good order grounds, on the basis that it was in the public interest to do so," Immigration Minister Alex Hawke said in a statement.

Alluding to the heavy criticism his government has faced for allowing the unvaccinated player into Australia, Mr Morrison said: "Australians have made many sacrifices during this pandemic, and they rightly expect the result of those sacrifices to be protected."

Serbian President Aleksandar Vucic condemned the move, telling the 34-year old in an Instagram message: "Novak, we stand by you."

"If you wanted to ban Novak Djokovic from winning the 10th trophy in Melbourne why didn't you return him immediately, why didn't you tell him 'it is impossible to obtain a visa'?" Mr Vucic added.

"Why are you mistreating him, why are you taking it out not only on him but also on his family and the whole nation," the Serbian president said.

At an emergency late-night court hearing shortly after the decision was announced on Friday, Judge Anthony Kelly ruled that Djokovic could not be deported while the appeal proceedings were happening. An appeal hearing is expected on Sunday.

The judge also said the government could detain Djokovic after he meets immigration officials in Melbourne on Saturday morning. However, he will be allowed to go to his lawyers' offices to prepare his case ahead of Sunday's hearing.

Citing a government document with more details on why it was revoked, Djokovic's lawyer, Nicholas Wood, said it was not because he is a danger to the public, but because "he will excite anti-vax sentiment".

Although Djokovic is not vaccinated, he has not actively promoted anti-vax disinformation. However, Australian anti-vaxxers have been using the hashtag #IStandWithDjokovic on social media.

Mr Wood added that the minister had chosen to "remove a man of good standing" from Australia and "impair" his future career over anti-vaccination comments Djokovic had made in 2020.

The nine-time Australian Open winner was hoping to defend his title next week, which if he won, would make him the most successful male tennis player in history with a record 21 Grand Slam titles.

For the moment, Djokovic remains in the Australian Open draw and is due to face fellow Serb Miomir Kecmanovic on Monday - the first day of the tournament.

Djokovic's visa was first revoked shortly after his arrival in Melbourne on 6 January, after Australian border Force officials said he had "failed to provide appropriate evidence" to receive a vaccine exemption.

His initial announcement that he was coming to play in the Open prompted a backlash from some Australians, who have lived under long and strict Covid lockdowns, because it was unclear if he could meet the country's strict entry rules. Melbourne in particular was hard bit by lockdowns, enduring 262 days under heavy restrictions last year.

Djokovic was detained for days at an immigration hotel, before his visa was reinstated by Judge Kelly, who ordered his release, ruling that border officials ignored correct procedure when he arrived.

The act allows him to deport anyone he deems a potential risk to "the health, safety or good order of the Australian community", however Djokovic can still appeal this.

"If he plays, I will not watch him": Watch strong reactions on the Novak Djokovic case in Australia
#vaccine  #Covid
Add Comment