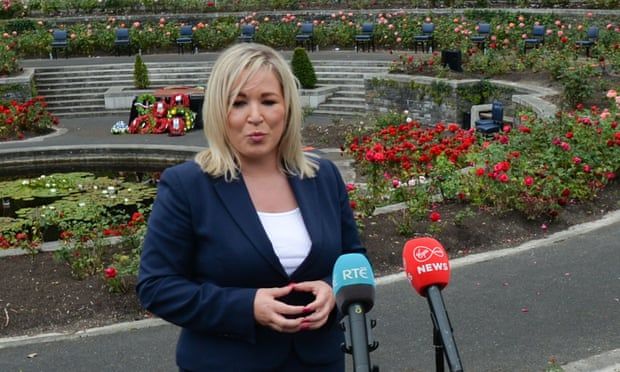 Sinn Féin’s Michelle O’Neill – who is deputy to the new first minister, Paul Givan of the Democratic Unionist party (DUP), in the power-sharing administration – called particularly for calm over a bonfire set up in a contentious site in north Belfast.

Bonfires are traditionally lit in unionist areas on 11 July before parades that take place the following day to mark the victory of the Protestant King William of Orange over King James II, a Catholic, at the Battle of the Boyne in 1690.

One of the bonfires has been set up in the unionist Tiger’s Bay area, adjoining the nationalist New Lodge community, with the Police Service of Northern Ireland (PSNI) having refused to protect contractors if they removed the construction, citing the risk of disorder.

Two Stormont ministers, Nichola Mallon of the SDLP and Sinn Féin’s Deirdre Hargey, launched court proceedings to force the PSNI to act, but without success.

Speaking to the BBC on Sunday, O’Neill said the court ruling was disappointing. She said: “Everybody is entitled to celebrate their culture, but this bonfire is on an interface area that draws all the heightened tension. I met with the residents and they feel under siege, their homes have been attacked and that is not acceptable in this day and age.”

The deputy first minister urged calm: “I hope it is a peaceful weekend, I hope it is a calm weekend. All of us in political leadership have a duty to try to ensure that is the case.

“I would call on everyone, enjoy your celebrations, do what it is that you do to enjoy your culture but there is no room for attacking people’s homes. I just hope we have a weekend that we are not looking at the scenes we witnessed a number of weeks ago when we saw tensions in interface areas, none of us want to see that.”

She added: “My message is clear, stay home, don’t be involved in street disorder, that is not where anybody should be.”

More than 160 bonfires are expected to be lit on 12 July, the main date in the Protestant loyalist order parading season. Last year, the parades were cancelled because of Covid, and they will be limited in size this year.

An additional factor is concern among unionists at the implementation of the Northern Ireland protocol, which sets out post-Brexit trade arrangements for the region, including checks on some goods between Northern Ireland the rest of the UK.

Sir Jeffrey Donaldson, the new DUP leader, has demanded the protocol be removed, calling it the “greatest threat to the economic integrity of the United Kingdom in any of our lifetimes”.

Donaldson is the DUP’s third leader in three months, during a period of turmoil within the main unionist party. Arlene Foster was forced out by an internal party revolt mainly inspired by worries about the protocol, and her successor, Edwin Poots, resigned after just 21 days in response to a fresh rebellion, triggered by terms he agreed over a deal to revive the Northern Ireland assembly.

After visiting last week, Labour’s leader, Keir Starmer, described the situation in Northern Ireland as fragile, and said there was considerable mistrust over the protocol.

The protocol is also inflaming tensions between the UK and EU, with Boris Johnson and his Brexit minister, David Frost, accusing Brussels of an overzealous interpretation of its policies, while the EU says the UK is failing to meet its obligations under a deal it signed.

Starmer said there was a feeling in Northern Ireland that Johnson “mis-sold” the deal “and he’s now dumping responsibility for making it work”.
#Boris Johnson  #Johnson  #Covid
Add Comment