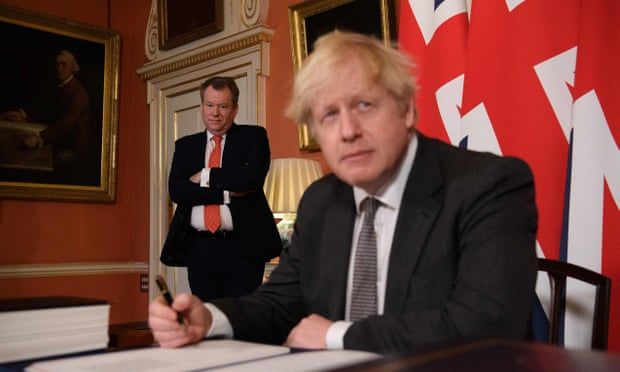 The prime minister has no alternative border mechanism for trade with the EU, says Guardian columnist Simon Jenkins
This year, Boris Johnson craved the titles of champion of Cop26 and star of G7. He saw something called “global Britain” and hoped it would crown his Brexit triumph, leading the world into a new age of peace and prosperity like a 21st-century Churchill. Instead, Johnson now finds himself in a morass of sleazy MPs, dodgy peers and Covid contracts. More seriously, he is about to plunge once more into the messy issue of the Irish border. His Northern Ireland Brexit protocol was supposed to liberate him from such torments, yet it has bound him hand and foot.

Two years ago, Johnson lied to unionists, telling worried exporters in Northern Ireland there would be no need to fill in extra paperwork when sending goods across the Irish Sea. He now wants to keep face by ditching the protocol altogether and presenting the EU with what amounts to a clear crisis: a permeable border drawn around the whole of Northern Ireland, which he knows is unacceptable to Brussels.

Johnson conducts his politics like a poker player who constantly raises the stakes while showing his opponents his cards. When politicians take control of trade negotiations, it usually means trouble. After the UK left the EU, the job of reordering its markets, customs and tariffs should have been left to officials and mediators. Devising a practical deal would have been in everyone’s interest. It was madness that no agreement was reached.

Such a deal might not have been greatly to Britain’s advantage, but Brexit was never going to be either. The UK opted to leave the top table and did so with no plan for replacing or safeguarding the trade it had lost in Europe, becoming an offshore supplicant for some 40% of its lost trade.

For years, Johnson taunted Europe and gloated over Britain’s impending superiority. He draped his negotiator, David Frost, in ermine and sent him to fight every battle as if it was the hundred years war. As every passing week now shows, this strategy was utterly counterproductive.

Even so, a sober observer of the Northern Irish predicament may wonder why a solution cannot be found. Goods passing into and out of Northern Ireland could surely be monitored electronically for customs and standards purposes. Brussels has already proposed an easing of bureaucracy, the chief bone of contention. It wants this to be overseen by the European court of justice, which is hardly a deal-breaker. The EU is the dominant regulator. The US would react in much the same way.

As it is, Johnson has made the whole issue politically toxic. Desperate for machismo, he huffs and puffs and threatens a “nuclear option”. He has no strategy for Britain’s relationship with Europe, no alternative border mechanism to meet what is clearly a real problem. Meanwhile, Brussels has an awesome arsenal of retaliatory trade and migration controls, which it is already mobilising.

Johnson’s woeful diplomacy has left him with no European leaders who have any interest in helping him. Half are happy to see Brexit fail. The other half are busy letting their farmers, haulage firms and care organisations gleefully tap into what was once a critical source of British labour.

The idea that Brexit would enable Britons to “take back control” of anything is absurd. Control has been lost. And Belfast’s buses are burning once more.
#Boris Johnson  #Johnson  #Covid
Add Comment