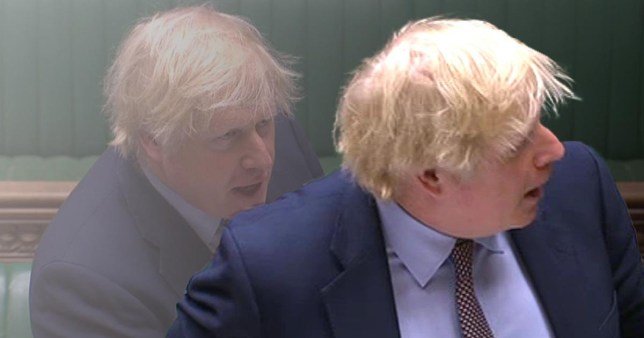 No, Boris Johnson did not wear an earpiece to PMQs

A conspiracy theory has been making the rounds this afternoon stating that Boris Johnson wore an earpiece to PMQs.
Some people think that the prime minister had someone whispering in his ear to help him answer questions, having seemed to struggle in previous weeks.

The theory is backed up by a photo that appears to show something resting in the PM’s ear.

Unfortunately, it is just a shadow or perhaps evidence that he has a rather large ear.

‘His boss Dominic Cummings telling him what to answer,’ one man wrote.

Another said: ‘Didn’t do him any good did it. Whoever was at the other end of that put too many errs and Ummms in.’

But comedian David Baddiel asked: ‘Isn’t that just the opening to the endless dark black hole of his skull?’

MP Bill Esterton wrote: ‘Suggestions that Johnson had an earpiece in for #PMQs. If he was receiving help, it didn’t show.

‘He was as useless as ever in response to calm, sensible scrutiny from @Keir_Starmer.’

Meanwhile, another Twitter user put it succinctly when he said: ‘I despise Boris Johnson and everything about this current government, but this #PMQs earpiece story is nonsense. Move along.’

Boris Johnson used today’s PMQs to defend the government’s record on coronavirus, saying he was ‘proud’ of how he had handled things despite analysis showing the true death toll had reached 50,000.
#Coronavirus  #Boris Johnson
Add Comment