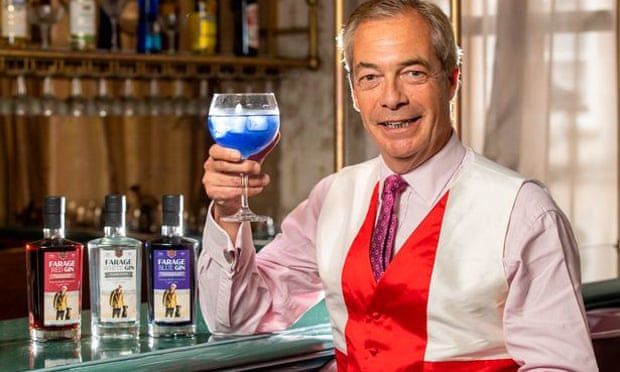 Former Brexit party leader launches red, white and blue versions ‘made in the heart of Cornwall’

He may be better known for his love of a foaming pint of English ale, but Nigel Farage has stirred up controversy in the far south-west by marketing his own gin, which he says is made by an “artisan distillery in the heart of Cornwall”.

In a product launch video, the former Ukip and Brexit party leader unveiled three types of Farage Gin – one red, one white and one blue – explaining this was his “patriotic take on this quintessentially British drink” and had been developed by a couple in their Cornish garden shed.

Farage’s foray into the spirits industry provoked scepticism and anger in Cornwall on Monday, with some critics expressing distaste that the millionaire champion of Brexit, which has caused millions of pounds of EU money to be lost to one of the poorest areas of northern Europe, was using the place to further his business interests. Others pointed out that gin has its origins on mainland Europe.

Perhaps most tellingly, gin producer after gin producer came forward to make it clear that they had had nothing to do with Farage Gin.

Brad Kettlewell, a salesperson at Tarquin’s Gin near Wadebridge, said: “There’s no way we would make that for him.” Pocketful of Stones, in Penzance, said it was “a strong no” when asked if they were involved. Craig Brook-Hewitt, the head distiller and owner of Mother’s Ruin 1751 distillery in Torpoint, said: “It definitely wasn’t us.”

A spokesperson for the campaign group All Under One Banner Kernow, which wants Cornish self-rule, said Farage was “mostly to blame” for the UK leaving the EU. “He’s trying to latch on to the image of Cornwall. He’s a Great England chauvinist. Farage will do nothing for Cornwall; he’ll cause division and hatred.”

In a promotional video, Farage said his gin had been “designed by a couple, developed literally in their garden shed using spring water”. He added: “I’ve been tasting this, testing it – it’s great gin.”

The red gin, he said, contained cherries from Kent, while the blue got its colour from gardenia flowers and the white had a hint of liquorice.

Farage spun a tale of his love for Cornwall: “I visited Cornwall for the first time in 1983. It was a fishing trip and I was 19. It seems a long time ago now, but my love for what I consider England’s most beautiful county has not changed.

“There is no better way to end a fully packed Cornish day than with a glass of gin and tonic as the sun goes down over the western horizon.”

Craft gin has become a popular business in the far south-west, with dozens of small concerns producing their own iterations. One of the most popular is Cornish Rock Gin, which produces 6,000 bottles a month and sells to a string of hotels, pubs and restaurants. 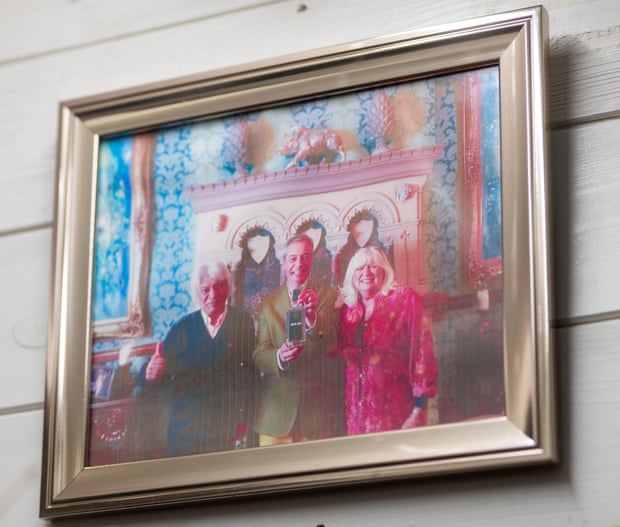 Gin producers George and Angela Malde with Nigel Farage in a photograph pinned to the wall of their shop.

George and Angela Malde, 69 and 72, sound very much like the couple Farage is talking about. They produce gin at their home near Camelford and have a spring in their garden. They also, it turns out, have a recent photograph of themselves with Farage, taken at nearby Camelot Castle Hotel in Tintagel, pinned to the wall of their shed/shop.

George Malde retweeted Farage’s PR bumf, and when the Guardian visited on Monday, accepted that the flavours, colours and shape of their bottles were very similar to Farage’s. He also admitted that he and his wife were friends with Farage. The Maldes have a colourful past. Before making gin, they used to own racehorses, and in 2001 were fined after a trading standards investigation into counterfeit goods.

But they denied involvement in Farage Gin. “It’s not us – we are too busy,” Malde said. He added that he “wasn’t really into Brexit” and thought Cornwall had “lost out” after the referendum result. He also said the business had received an EU grant in its earlier days.

Farage was not giving the game away. He said he hoped Brexiters would buy his gin to enjoy and that perhaps some people would buy it as a “fun” present for Remainers as well.

But he said he would not risk his partners being targeted by haters. “There is a hard-left violent hate mob out there and I wouldn’t expose anyone to that. That would be most unfair given the level of hate in this country.”