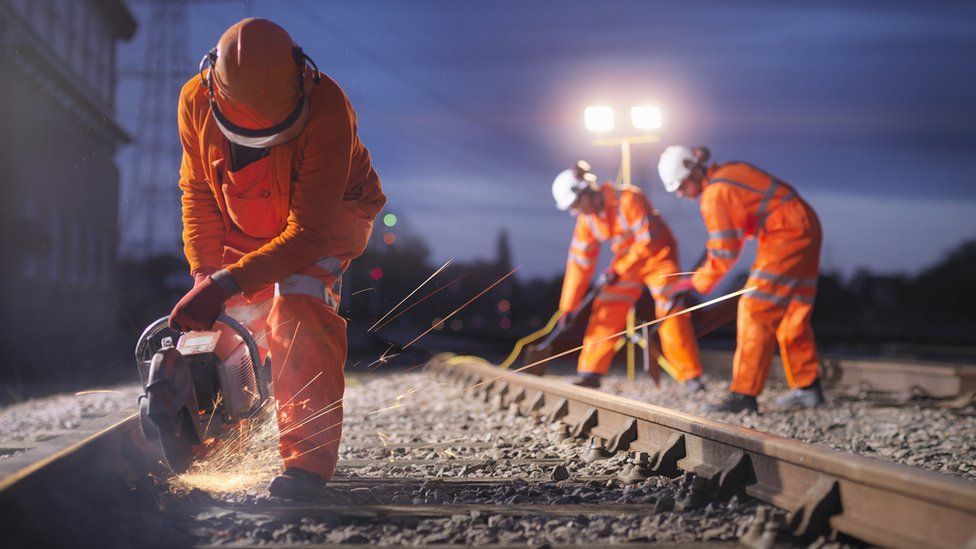 Network Rail has made workers a fresh pay offer in an attempt to to break a deadlocked row with unions over pay, jobs and conditions.

It said the offer was worth more than 5%, but depended on workers accepting "modernising reforms".

But the RMT union said the offer was a real terms pay cut and would mean cutting a third of front-line maintenance roles.

The company and unions have been in discussions since the RMT staged three 24-hour strikes last month which severely restricted services.

Network Rail said the offer to staff, which include maintenance and signalling workers, was "conditional on achieving savings through modernising reforms", and said money was on the table for a pay deal next year too.

"While money is extremely tight because of the railway's financial troubles following the pandemic, we can afford to make this offer if our people accept change and compromise, which will fund it," a Network Rail spokesman said.

All union members were being offered more than 5%, and the lowest paid would be getting a more than 10% pay rise, a spokesman told the BBC.

In addition, there would be no compulsory redundancies for two years, which unions had been calling for, and employees and their immediate families would get 75% off rail travel.

The spokesman said Network Rail hoped the fresh offer to its 20,000 employees would break the deadlock that led to strike action.

The RMT union said its executive committee would consider the offer on Wednesday.

It said the offer "amounts to a real terms pay cut over the next two years and will involve cutting a third of all front-line maintenance roles and 50% of all scheduled maintenance work".

This is while Network Rail high level managers get a more than 40% pay increase "for adopting modest flexibility in comparison to RMT members", it said.

The union's general secretary Mick Lynch said: "Network Rail and the train operating companies need to understand that RMT has done deals with both London Underground and recently Merseyrail that were well in excess of what our members are being offered here.

"Railway workers have lost thousands of pounds in earnings due to a pay freeze in recent years and they refuse to be short-changed again.

"We will not hesitate to call further strike action and seek to coordinate with Aslef and TSSA, if the rail industry will not seek a negotiated settlement with us."

Members of the train drivers' union, Aslef, voted on Monday to go on strike over pay, drawing criticism from the government.

The union said it was "happy to talk to anyone to do a deal and make sure Britain's railways aren't disrupted".