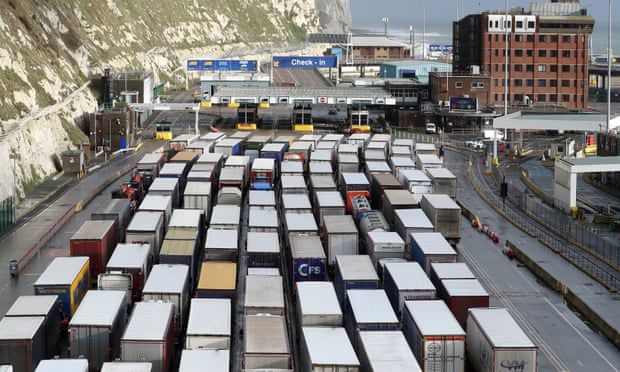 Drivers will have to take regular lateral flow tests if they remain in England for more than 48 hours
Ministers have been accused of acting too late after they announced new testing rules covering lorry drivers entering England.

Hauliers, and other workers who are exempt from the quarantine rules that apply to international arrivals, will have to start taking regular lateral flow Covid tests if they remain in England for more than 48 hours.

Announcing the move on Twitter, the transport secretary, Grant Shapps, said it would help enable keep track of any future coronavirus variants of concern.

But the regime will not come into force until 6 April and Yvette Cooper, the Labour chair of the Commons home affairs committee, said this was almost two months after concerns were first raised in France about the spread of the South African variant, and more than three months after testing was introduced for hauliers leaving the UK.

Cooper also said it was not clear why hauliers who spent less than 48 hours in the UK were not subject to testing. “Given the potential risks from the South Africa variant to the vaccine rollout and the route out of lockdown, ministers should be acting much faster and being much more vigilant than this,” she said.

Truck drivers, and a range of other workers such as seafarers, aircraft pilots and crew, and international rail crew, are exempt from the standard English quarantine rules that require people arriving in the country to self-isolate for 10 days and take two tests during that period.

From 6 April, workers in these exempt categories will have to take a lateral flow test before the end of day two, if they are staying for more than 48 hours, and will then be required to take a test every three days.

Tests will be available at normal testing centres, or at one of the dedicated testing sites set up for hauliers. If someone tests positive, they will be required to take a more accurate PCR test for confirmation.

In a related move, the government is also making it a legal requirement for all hauliers arriving in England to self-isolate in their cabs while they are in the country, unless they have to leave it for one of several specified reasons, such as the need to buy food.
#vaccine  #Covid  #Coronavirus
Add Comment