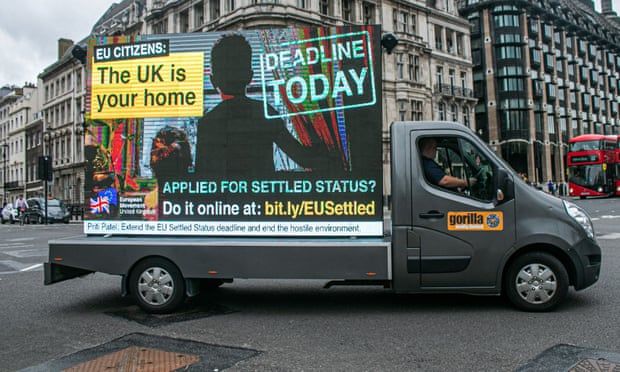 Ministers under fire over 69p-a-minute helpline for EU citizens

Callers to the “view and prove” immigration status telephone number, 0300-790 6268, must also preauthorise a potential £5 credit on a bank card before talking to an assistant.

Campaigners at the3million group have written to the future borders and immigration minister, Kevin Foster, to protest against charges that amount to £10.35 for 15 minutes of assistance.

They say the charges are “contrary to the assurances given” in the high court recently and are “causing a lot of distress”.

The activists’ group failed in its court application earlier this year to force the government to issue EU citizens a physical document to prove their right to work and live in the UK after Brexit.

However, at the hearing the Home Office told the judge that “the defendant will not charge for calls”.

Under the post-Brexit system, the Home Office generates “shared codes” that last for 30 days to allow EU citizens evidence of their right to rent or work in the UK.

But the3million says it is concerned that the helpline is needed by those who are not digitally literate and those who are confronted with technical glitches trying to prove their status in the first place.

“This will have dramatic consequences not only for those who struggle with digital technology, but also for those who are seeing technical glitches with their digital status, and for those who can’t persuade employers, landlords or other service providers to engage with it.

“The only mitigation the Home Office is providing is an overburdened telephone helpline, and it adds insult to injury to be charging someone over £10 for a 15-minute call – on top of their regular call charges,” said a spokesperson, Maike Bohn.

In its letter to Foster, the3million cited three types of technical bugs preventing EU citizens getting on with their daily lives including error messages for those who have updated their ID documents or contact details.

The group also told him the “view and prove” service erroneously presents those who have been in the country for less than five years and have pre-settled status as limited to six months status.

Part of the issue appears to relate to a lack of explicit communications. The helpline does not refer to EU citizens or to settled status on its initial voice menu.

The Home Office indicated there is an option on the menu which does not carry charges.
Add Comment