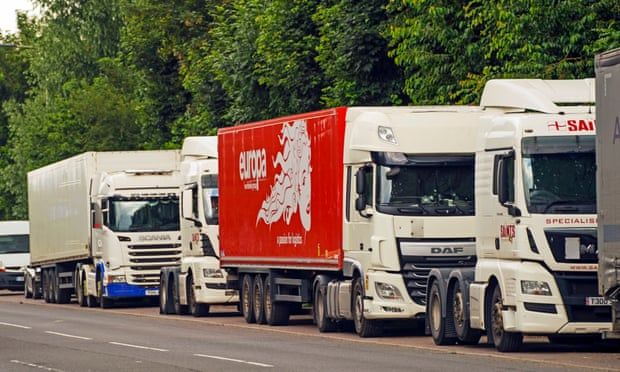 Business secretary reported as saying foreign labour only offers ‘temporary solution’ as companies face supply chain crisis
Employers have been told to invest in UK-based workers rather than relying on labour from abroad as supermarkets and suppliers struggle to contend with a chronic shortage of lorry drivers caused by the exodus of hauliers from EU countries because of Brexit and Covid.

The business secretary, Kwasi Kwarteng, wrote to business leaders on Friday saying foreign labour only offered “a short-term, temporary solution” after industry groups, Logistics UK and the British Retail Consortium (BRC) called on the department to provide temporary UK visas to EU truck drivers. They said the lack of drivers was “increasingly putting unsustainable pressure on retailers and their supply chains”.

The government’s furlough scheme is due to end on 30 September and this has raised concerns about a subsequent rise in unemployment. In the letter, Kwarteng urged employers to help the “many UK-based workers [who] now face an uncertain future and need to find new employment opportunities”.

In the letter addressed to Logistics UK and the BRC, Kwarteng wrote: “I am sure you would agree on the importance of utilising the strength of our domestic workforce and how our migration policies need to be considered alongside our strategies to ensure UK-based workers are better able to secure decent employment opportunities.”

Covid-related disruption has brought Driver and Vehicle Licensing Agency (DVLA) testing centres to a standstill, creating a huge backlog of drivers waiting to take their HGV test. A review of the shortage occupations list, which sets out jobs for which overseas workers can apply for visas, is not due until next year.

HGV drivers are not included on the list, but there is pressure from supermarkets to include them to help ease the shortfall while more UK drivers are trained.

Home Office officials are said to be blocking the review being brought forward, amid concerns it could lead to other sectors demanding inclusion.

A source told PA: “It has been floated and seems like the obvious solution, but there’s been a lot of pushback from the Home Office.”

A government spokesperson said: “We have a highly resilient food supply chain and well established ways of working with the food sector to address food supply chain disruptions. We recently announced a package of measures to help tackle the HGV driver shortage, including plans to streamline the process for new drivers to gain their HGV licence and to increase the number of driving tests able to be conducted.

“However, most of the solutions are likely to be driven by industry, with progress already being made in testing and hiring, and a big push towards improving pay, working conditions and diversity.

“We want to see employers make long-term investments in the UK domestic workforce instead of relying on labour from abroad and our plan for jobs is helping people across the country retrain, build new skills and get back into work.”

The shortages have hit several retailers and restaurant chains. Nando’s experienced a shortage of chickens due to a combination of not enough drivers and fewer staff working in meat factories.

Other delays have affected McDonald’s, which said this week it had run out of milkshakes and bottled drinks while it prioritised deliveries of other products in the interim.

Organisations from the food and drink industry have recommended a 12-month Covid-19 recovery visa to help firms recruit staff, including HGV drivers, and an expanded seasonal worker scheme for the horticulture sector.
#COVID-19  #Covid
Add Comment