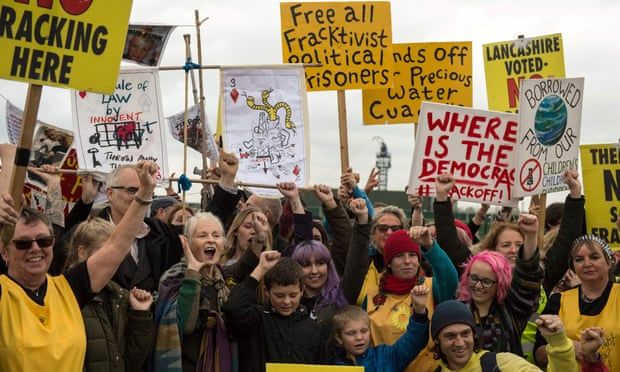 Michael Gove ‘not convinced’ by case for more fracking in UK

Michael Gove has said he is “not convinced” by the case for more fracking in the UK, opening up a cabinet split after Boris Johnson ordered a rethink and Jacob Rees-Mogg backed reversing the moratorium.

Gove, the levelling up secretary, made the comments at an environment reception, where he also spoke of the need for more onshore wind power.

Onshore wind is blocked in many cases by planning restraints as the rules make it easy for communities to object. But Gove’s brief now encompasses planning, raising the possibility he could use reforms of the system to make it easier for onshore wind projects to gain permission.

Casting Vladimir Putin in the role of a “pusher” of oil and gas fuelling an addiction to hydrocarbons in the west, Gove told the reception: “The only way you can wean yourself off the addiction is to diversify the sources of energy we have. The only way to diversify our sources of energy is if we ensure that we continue to invest in renewables, onshore and offshore wind, solar power and also look at the potential of hydrogen in the future, if we allow nuclear to be part of the mix and recognise that hydrocarbons have a role to play but a diminishing one over time.”

Ministers are exploring the case for reversing the ban on fracking after No 10 ordered a new energy strategy amid soaring prices and the global move to reduce dependence on Russian oil and gas. The UK is phasing out Russian oil by the end of the year and looking to cut out gas as well.

There is also still uncertainty over the fracking wells owned by the oil and gas production company Cuadrilla, which is planning to concrete them over within weeks.

Johnson has told the business secretary, Kwasi Kwarteng, that it does “not make sense” to seal its shale gas wells. His spokesperson also opened the door to a shift in the UK’s position last week, saying that “all options” would be considered before the forthcoming energy strategy was completed.

However, no moves have yet been made to reverse a notice issued by the Oil and Gas Authority (OGA) that both wells must be plugged with cement by the end of June. The government has instead indicated to Cuadrilla that it is welcome to apply for an extension to keep the wells open.

Before last week, the government had repeatedly insisted there was no case for fracking. Greg Hands, a business minister, also struck a negative note in the House of Commons on Tuesday, saying: “Even if the pause were lifted, there are unlikely to be sufficient quantities of gas available to address the high prices affecting all of western Europe and it would certainly have no effect on prices in the near term.”

In contrast, Jacob Rees-Mogg, the minister for Brexit opportunities, had also signalled support for a change in policy in cabinet and in public.

On his Moggcast podcast, he called shale gas “very clean” and appeared to dismiss concerns about tremors caused by drilling. He said: “Some of the seismic effects are ones that can only be measured with sophisticated equipment. Others are equivalent to a bus passing by your house, assuming there’s a pavement in between you and the house. And as I say, it’s not the San Francisco earthquake.”