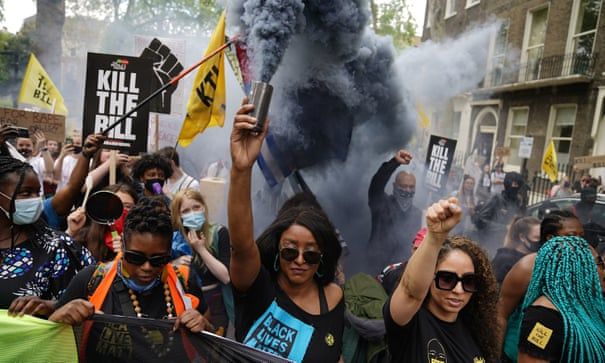 Four members of Black Protest Legal Support arrested at ‘kill the bill’ protests have their charges dropped
The Metropolitan police has said legal observers at protests have an important role to play in the independent scrutiny of policing, as it dropped actions against four people who were arrested during “kill the bill” protests this spring.

It is believed to be the first time a police force has admitted the role played by legal observers during protests. The observers are independent volunteers who attend protests to monitor police conduct.

The four observers, all volunteers with Black Protest Legal Support (BPLS), were arrested at protests in March and April and handed fines for breaches of coronavirus regulations. Their arrests prompted a legal challenge – supported by Liberty, the civil rights group – arguing that observers ought to have been covered by an exemption and that their arrests had been unlawful.

After weeks of pre-action correspondence, lawyers for the Met this week confirmed that no further action would be taken against the four observers . A spokesperson for BPLS said the organisation was confident the same decision would be taken in the case of a fifth observer.

In a letter to Liberty, the force said it had previously treated legal observers the same as any other participant in a protest, but that it now accepted they were participating on an independent basis to provide legal services to protesters.

The letter added: “Now that the presence at protests of independent legal observers from BPLS has been brought to our attention, we accept that they have an important role to play in providing independent scrutiny of protests and the policing of protests.”

The force did not, however, accept that the arrests were unlawful.

A spokesperson for BPLS described the arrests as part of a wider chilling effect on the right to protest, that was coloured by racism and enabled by Covid regulations and the proposals to crack down on protest contained in a new policing bill.

“So this challenge was not about legal observers securing better or different treatment,” the spokesperson said. “It was about holding the police to account and ensuring they cannot act with impunity on the ground.

“We won’t allow them to prevent us from monitoring their many unlawful actions against protesters – particularly those from black, brown and racialised groups. Even the Met have accepted our scrutiny is important.

“We have always know this scrutiny is vital because the police are institutionally violent and racist.”