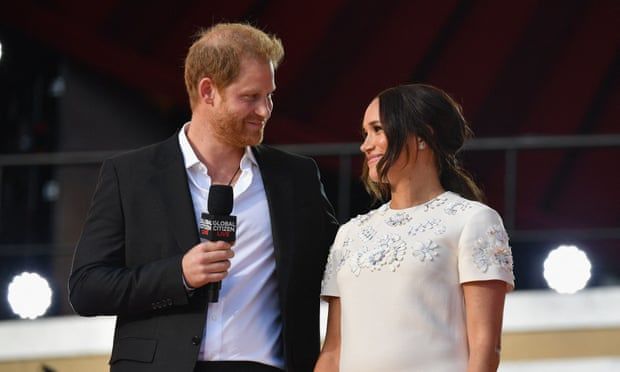 Analysis identifies 83 accounts behind 70% of tweets abusing Duchess and Duke of Sussex
The Duchess of Sussex, who has said she avoids social media for “my own self-preservation”, has been the subject of a coordinated hate and misinformation campaign on Twitter, according to a new report.

Both she and Prince Harry, who are advocates for healthier social media, have been targeted on the platform, with Meghan receiving about 80% of the abuse, according to the Twitter analytics provider Bot Sentinel.

It analysed 114,000 tweets relating to the couple, and identified 83 accounts that it alleged were behind 70% of the more virulent anti-Sussex tweets.

“Our analysis allowed us to isolate 55 single-purpose accounts we identified as the primary hate accounts and 28 secondary hate accounts that mainly amplified the primary accounts,” the report said. With the accounts having a total of 187,631 followers, using analytic tools Bot Sentinel estimated “a combined unique potential reach of 17 million users”.

Some tweets used coded racist language. The pattern of how the accounts interacted with one another was not “organic”, the report said, suggesting a coordinated effort to amplify harassment of the couple. Most appeared to be generated by humans, Christopher Bouzy, Bot Sentinel’s chief executive, said. He told the Washington Post: “We looked for automated accounts and found very little evidence of bot activity.”

Four of the 55 primary accounts highlighted in the report have been suspended by Twitter, the Washington Post said. Twitter reportedly found no evidence of widespread coordination, the use of multiple accounts by single people, or other platform manipulation tactics, the Washington Post reported.

Bouzy said there was a noticeable drop in activity targeting the couple shortly after the report was published. Bot Sentinel is a crowdfunded website and browser plug-in created in 2018 to analyse Twitter accounts and identify activity that violates the platform’s terms of service.

Bouzy told BuzzFeed News that the anti-Meghan Twitter campaign was unlike anything he or his team had seen before. “There’s no motive,” he said, comparing the anti-Meghan campaign with other disinformation and harassment campaigns on Twitter such as the #StopTheSteal movement to overturn the results of the 2020 US presidential election, or the campaign to remove the actor Amber Heard from the Aquaman sequel as a result of abuse allegations made against her by her former husband, Johnny Depp. “Are these people who hate her? Is it racism? Are they trying to hurt [Harry and Meghan’s] credibility? Your guess is as good as ours.

Harry and Meghan cited social media toxicity as a factor in their decision to step back from their roles as working royals. In 2019, Buckingham Palace, Clarence House and Kensington Palace issued new social media guidelines to deter trolls, in particular hate-filled personal abuse directed at Meghan and at the Duchess of Cambridge.