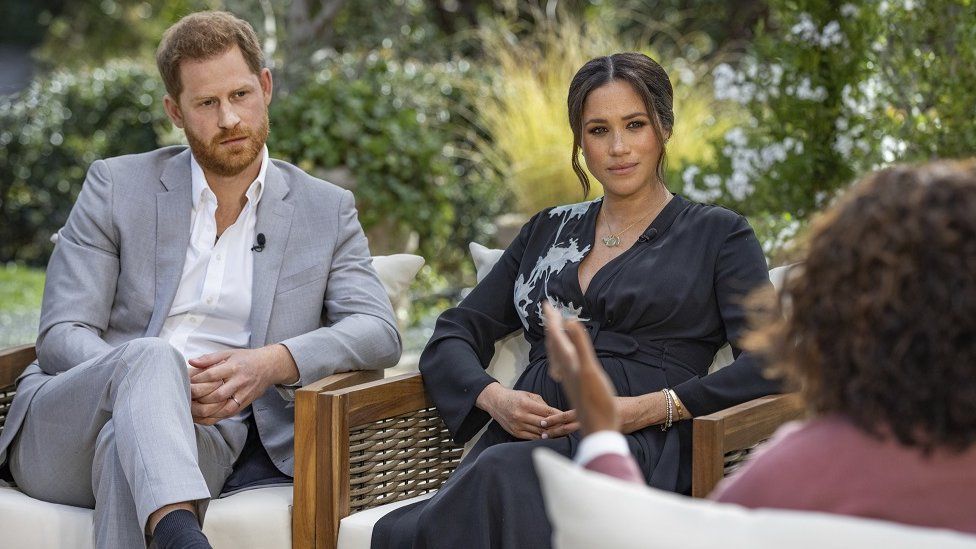 The Duke and Duchess of Sussex's highly-anticipated TV interview with Oprah Winfrey is set to air in the US.

It marks the first sit-down interview with the couple since they quit their roles as senior working royals in 2020.

They are expected to discuss their new life in the US and their experiences in the UK.

Hours before the programme, the Queen stressed the importance of "closeness and community" in her Commonwealth Day message - broadcast on BBC One.

She did not comment on the upcoming interview, focusing instead on the global impact of the coronavirus pandemic.

Senior royals including the Prince of Wales and the Duke and Duchess of Cambridge also joined forces to appear in the special programme on Sunday to celebrate Commonwealth Day.

In a clip released earlier this week, Meghan told Oprah it was "really liberating" to now feel "able to speak for yourself".

It comes as Buckingham Palace is investigating claims the duchess bullied royal staff.

The report about the allegations of bullying levelled at Meghan were first published in the Times after the interview with Oprah was recorded.

Meghan has called it the "latest attack on her character".

The duke and duchess announced they were stepping down as working royals in March 2020, and now live in California.

Prince Harry recently said he had to step back from royal duties to protect himself and his family from the "toxic" situation created by the UK press, as it was "destroying my mental health".

Deals have been struck in more than 17 countries across the world for the rights to screen Oprah's interview.

The chat show host, who attended the couple's wedding in 2018 and is thought to live near them in California, has promised it will be "shocking" with "nothing off limits".

Meghan will be interviewed about marriage, motherhood, life as a royal and "how she is handling life under intense public pressure", CBS has said. The couple will also discuss their move to the US and their future plans.

Several clips have already been released by CBS and have racked up millions of views.

In a clip shown on CBS's This Morning show earlier this week, Meghan was asked why she has decided to give an interview now.

She said it was the result of "so many things", including that "we're on the other side of a lot of life experience that's happened and also that we have the ability to make our own choices in a way that I couldn't have said yes to then".

In two earlier clips released by CBS, Meghan said Buckingham Palace could not expect her and Prince Harry to be silent if it was "perpetuating falsehoods about us", while Prince Harry drew parallels between the treatment of his late mother, Diana, Princess of Wales, and Meghan.

After these two clips were released, the Times published its report saying Meghan faced a complaint of bullying from her staff while she was a working royal at Kensington Palace.

The palace said it was "concerned" about the accusations and an HR team would look at the circumstances outlined in the article.

On the reported allegations of bullying, the duchess has said in a statement through her spokesman she was "saddened" by the "attack on her character".

The timing of the broadcast has come during a tumultuous period for the Royal Family.

While the interview was recorded before the Duke of Edinburgh, Harry's grandfather and the Queen's husband, went into hospital, it will air as the prince continues his recovery in hospital following a procedure for a heart condition.

It also comes on the back of a more light-hearted interview Prince Harry gave to James Corden on The Late Late Show, which aired last week - again while Prince Philip was in hospital.

In her Commonwealth day address, the Queen spoke about staying in touch with family and friends during "testing times", and how there had been a "deeper appreciation" of the need to connect to others during the Covid-19 crisis.

"The testing times experienced by so many have led to a deeper appreciation of the mutual support and spiritual sustenance we enjoy by being connected to others," she said.

As footage was played of the Queen's numerous official video calls, the 94-year-old acknowledged, "we have had to become more accustomed to connecting and communicating by our innovative technology" to stay in touch with friends, family, colleagues, and others during the pandemic.

She added: "Increasingly, we have found ourselves able to enjoy such communication, as it offers an immediacy that transcends boundaries or division, helping any sense of distance to disappear."

"We have all continued to appreciate the support, breadth of experiences and knowledge that working together brings.

"And I hope we shall maintain this renewed sense of closeness and community."

And she praised the "selfless dedication to duty" of medical staff and other key workers.