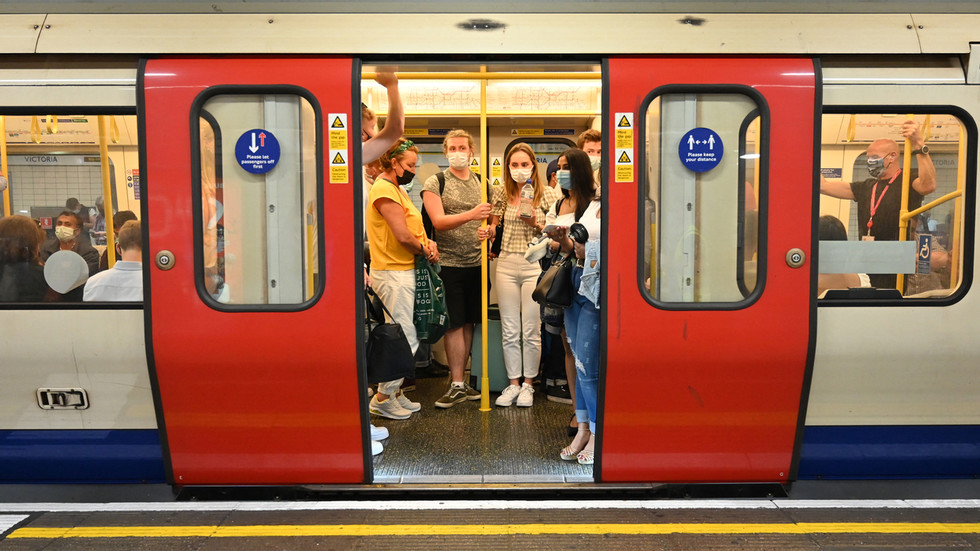 Mayor Khan is pushing for compulsory mask wearing on the Underground, seeking to make it into a by-law, enabling the British Transport Police to enforce it and impose fixed penalties on those daring to board the trains maskless.

“We are trying to lobby the Government to allow us to bring in a bye-law, so it will be the law again, so we can issue fixed penalty notices and we can use the police service and BTP to enforce this,” Khan told the BBC’s Newscast podcast.

Making mask-wearing compulsory again would make people feel safer and encourage them to use the Tube, the mayor said.

“We need people to be coming back to the West End. We want to encourage people to return to their offices,” he stated.

"They are not going to do so if they don’t feel public transport is safe."

Mandatory mask-wearing for England was dropped on July 19, though Khan has consistently opposed the move. Ahead of ‘Freedom Day’, which ended compulsory mask-wearing, he asked Transport for London (TfL) to enforce it as a “condition of carriage,” making TfL workers able to ask non-compliant passengers to leave the bus or train.

If pushed through, the changes proposed by Khan would effectively revert the situation on London public transportation to pre-July 19 conditions. Despite the easing of restrictions, around two-thirds of adults in the UK still plan to continue wearing masks, according to official statistics. The number of people wearing masks on public transportation also remains high, with around 85% of Tube, bus, and train passengers continuing to do so.