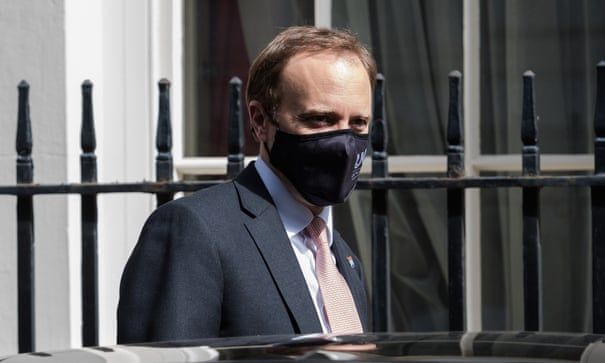 Health secretary breached code ‘in technical terms’, new adviser on standards concludes
Matt Hancock broke the ministerial code by failing to declare a stake in a family company that won an NHS contract. A “technical” oversight by the health secretary was uncovered by Christopher Geidt, the government’s new adviser on ministerial standards, who also said Boris Johnson acted “unwisely” over the funding of renovations to his Downing Street flat.

While the prime minister was cleared of having broken the ministerial code, Hancock was found by Lord Geidt to have broken it – albeit it “in technical terms” and only in a “minor” way.

Questions were raised about Hancock’s register of interests, given that his sister and brother-in-law run a company called Topwood Ltd in which the health secretary has a 20% stake. The firm won a contract with NHS Shared Business Services Ltd in 2019, but he did not immediately declare his interest.

This prompted criticism from Labour that the Conservative government was “infected with widespread cronyism”, though a government spokesperson insisted last month that Hancock had “acted entirely properly”.

Geidt said there was a danger people might perceive Hancock’s link to the firm to represent a conflict of interest and that it should have been declared at the time. But this did not occur, because of the health secretary’s “lack of knowledge” about the contract being awarded and it was “in no way deliberate”, Geidt found.

Hancock, who is already fighting to salvage his reputation after Dominic Cummings accused him of “criminal” behaviour and repeated lies in the handling of the Covid pandemic, was judged by Geidt to have acted “with integrity”, so the finding should “in no way impugn his good character or ministerial record”.

A spokesperson for the health secretary said the ministerial code breach was “only … technical in nature” and his interests were “declared diligently”, but said he accepted Geidt’s finding. Hancock has denied Cummings’ claims.
#Boris Johnson  #Johnson  #Covid
Add Comment