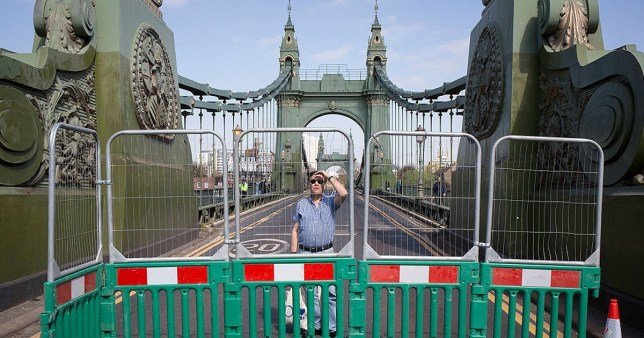 Hammersmith Bridge has been closed to all members of the public after safety inspectors found the recent heatwave had worsened cracks in the 133-year-old structure.

Even boats will not be allowed to pass under the bridge, which is used by up to 16,000 people every day. A repair bill of £140 million could be needed to keep the decaying bridge secure in the long term.

Hammersmith Bridge has been closed to motorists since April 2019 due to ‘critical faults’ found by safety sensors, but it was still open to cyclists and pedestrians while repairs are carried out. Recent inspections carried out as part of ongoing restoration revealed that blistering heat over the past few weeks had caused cracks on the bridge to expand.

Previously pedestrians and cyclists were allowed on the bridge while restoration work is carried out (Picture: Getty Images)

The bridge is owned and maintained by Hammersmith & Fulham Council, whose leader Cllr Stephen Cowan said: ‘Safety is the number one priority. I’m absolutely sure that we averted a catastrophe by closing this 19th century suspension bridge to motor vehicles last year. ‘We have some of the best engineers in the world working on this scheme.

They advise we now face a similar dilemma. ‘I appreciate how inconvenient this will be to thousands of people on both sides of the river and I am sorry about that, but we must follow the engineers’ advice which is why the bridge will be closed with immediate effect today. ‘We will update everyone as soon as engineers have investigated the scale of the recent damage. I have instructed them to find a plan to safely reopen it as quickly as they can.’

On the other side of the bridge lies Barnes, in the borough of Richmond upon Thames. Chairman of the authority’s Transport and Air Quality Services Committee Cllr Alexander Ehmann said: ‘We fully support the decision to close Hammersmith Bridge on safety measures.

‘Critical faults’ including damaged road surfaces led to the bridge being closed to motorists in April 2019 (Picture: Getty Images)

Safety must come first. ‘Richmond Council believes that the safety of all residents must be our number one priority. ‘However, what was urgent before is now an emergency.

A critical piece of London’s infrastructure cannot be allowed to crumble into the Thames, while the Government and London Mayor wrangle over responsibility for the funding. ‘With a potential repair bill of £140 million, the Government are the only credible funding mechanism.

They must now act in the public interest and supply the long-overdue funding to ensure the bridge can be saved.’