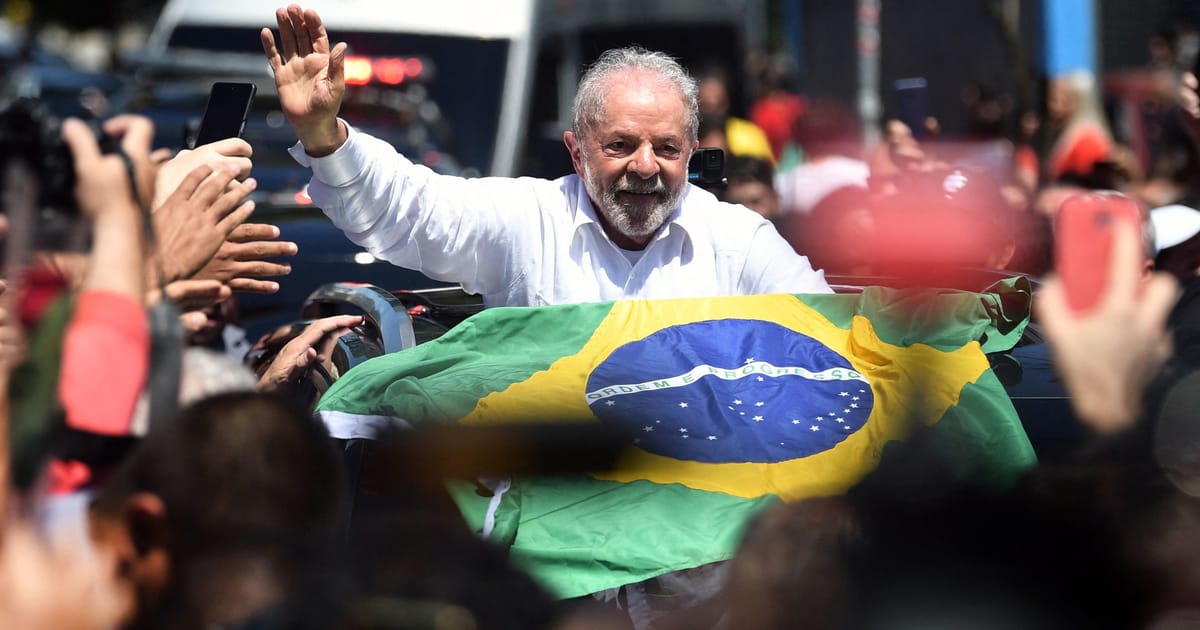 Lula wants to get an early trade deal with the EU. Brussels needs pledges on the environment first

“This is the result we were all hoping for.” The center-left European lawmaker MEP Kathleen Van Brempt captured the mood in Brussels on Monday, as the EU breathed a diplomatic sigh of relief over the victory of left-winger Luiz Inácio “Lula” da Silva in the second round of Brazil’s presidential election.

Brussels has big ambitions in Latin America. The European Union needs to diversify its trade flows away from Russia and — to a lesser extent — China. With far-right incumbent Jair Bolsonaro on his way out of power, the EU is now keen to revive its ties with Brazil on climate change, deforestation and trade.

“I look forward to working with you to address pressing global challenges, from food security to trade and climate change,” European Commission President Ursula von der Leyen tweeted to Lula on Monday morning.

But Brussels may have to wait in line. Russia wants to trade and China will also be competing for influence in the region, especially after relations between Brazil and Beijing had soured under Bolsonaro. Chinese foreign ministry spokesperson Zhao Lijian welcomed Lula's victory on Monday, saying that China wants to raise the comprehensive strategic partnership with Brazil to a new level.

The most concrete way for the EU to get its foot in the door is to finally tie up the loose ends with the trade deal between the EU and the Latin American Mercosur bloc — made up of Brazil, Argentina, Uruguay and Paraguay.

The closer cooperation would not just ease trade between the economies on both sides of the Atlantic, but is also key for Brussels to be less dependent on China’s raw materials for its green transition.

The Mercosur pact was sealed at a political level in 2019 but has been effectively on ice since then, mostly because of the rampant deforestation of Brazil’s Amazon rainforest under Bolsonaro, which dismayed the EU and French President Emmanuel Macron in particular. Free traders also pointed to more protectionist concerns, particularly in France, which held up progress for the deal over fears of opening the floodgates to imports of Brazilian beef.

Lula's election may be the key to easing those environmental concerns and unlocking the Mercosur deal. In a huge win for the global fight against climate change, he has made clear he's keen to tackle deforestation of the Amazon.

From the EU side, the political stars are also aligned. A range of trade-friendly countries — the Czechs, the Swedes and the Spanish — are at the helm of the EU’s rotating Council presidency this year and next and have already said they want to get the deal back on track.

There may be trouble ahead

To get the agreement through the European Parliament, Brussels plans to negotiate an extra environmental protection document with the Mercosur bloc to try to assuage climate concerns.

But just how far those extra demands should go is already a sensitive discussion within the European Commission, and will likely prove to be even more contentious when it is discussed with the European Parliament, EU countries and the Mercosur countries.

"We will not nail it at the door of the Berlaymont," said a senior EU official, referring to the European Commission building in Brussels. "We need to play this carefully." The official stressed that the EU should propose something that is "more palatable for the other side."

Van Brempt, the trade committee MEP from the socialists, fired a warning against too much flexibility from Brussels. If the Commission wants this deal to pass through Parliament, extra environmental commitments from the Mercosur countries cannot be empty promises, she said. If Brazil or the other countries don’t live up to their promises, they should risk trade sanctions, in line with the EU’s new policy of ensuring trade deals are green.

If Mercosur countries have additional demands to bring to the table, then so be it, Van Brempt argued. “We have to get this deal right,” she said. “Trade is a key component of our geopolitical direction. For that, a renewed cooperation with Brazil is key.”

On his end, Lula has already said he wants to renegotiate some areas of the Mercosur deal in favor of Brazil’s industrial development. Strengthening Brazilian industry was one of his main promises during the campaign.

"In the first six months, we will conclude the agreement with the European Union," Lula said in September. That, he said, must be "an agreement that takes into account the need for Brazil to industrialize again."