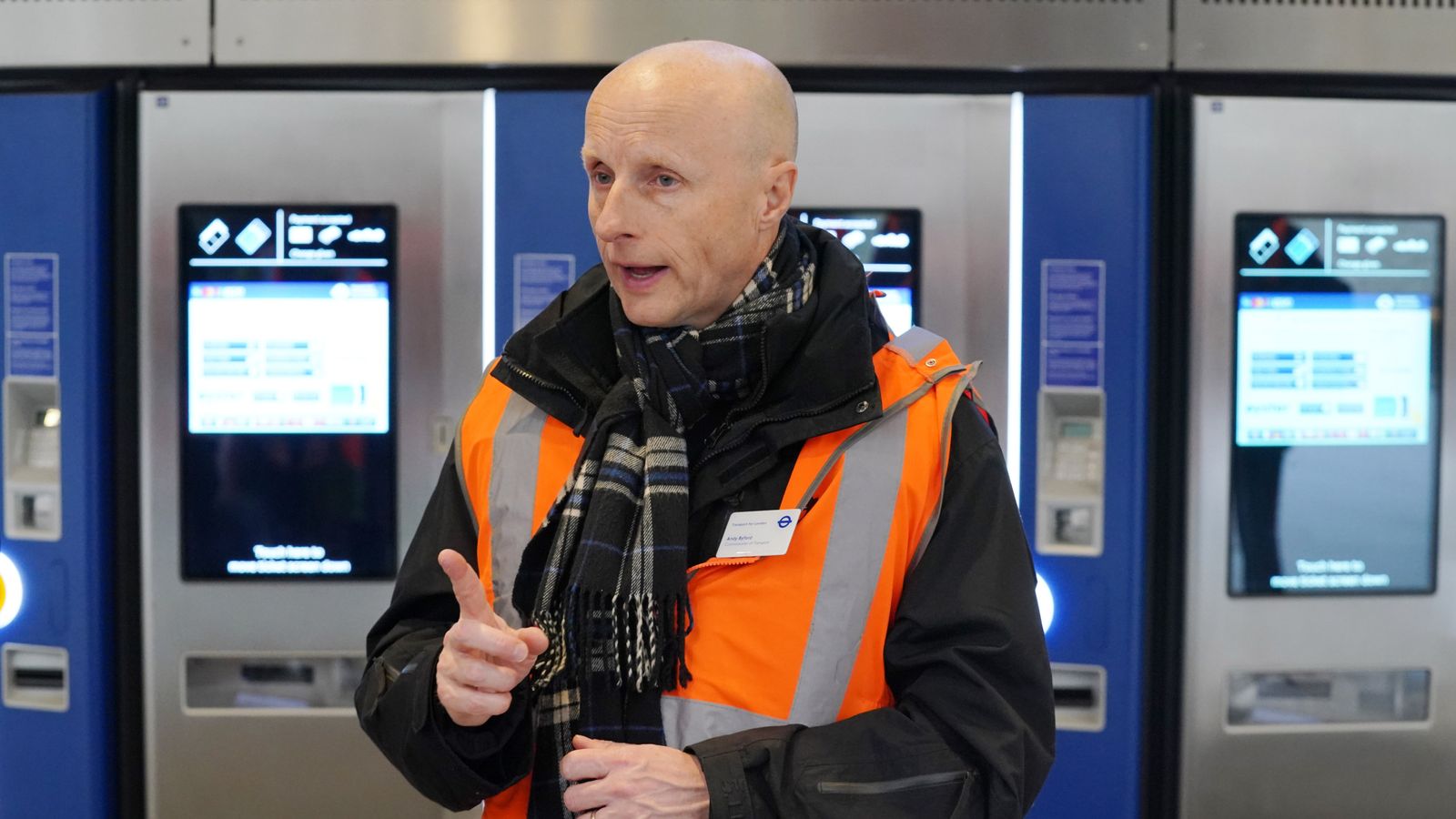 Andy Byford, who took the helm at TfL in June 2020, is to step down later this year after steering it through the worst crisis in its history.
Andy Byford, the Transport for London (TfL) chief who helped steer the capital's bus and Tube networks through the most financially precarious periods in their history, has resigned weeks after securing a new long-term funding deal.

Sky News can reveal that Mr Byford's departure as TfL commissioner will be announced on Thursday morning.

His exit after nearly two-and-a-half years in the job will leave the London mayor, Sadiq Khan, searching for a successor who can build on the outgoing chief's legacy.

An industry source said on Wednesday evening that Mr Byford had notified the mayor of his intention to step down several months ago.

He is expected to leave before the end of the year.

The TfL commissioner's tenure saw him deliver the Elizabeth Line project - more commonly known as Crossrail - after years of financial and operational problems.

The 73-mile line is now carrying hundreds of thousands of passengers every day.

Mr Byford's most important short-term achievement, however, was the delivery of a long-term funding deal for TfL after two years in which its balance sheet was ravaged by the COVID-19 pandemic.

Caught in the crossfire between Grant Shapps, the then transport secretary, and Mr Khan, the TfL chief was forced to manage the bus and Tube networks on short-term government handouts which sometimes lasted only a matter of days.

The organisation narrowly averted having to file formal bankruptcy notices on several occasions, such was the fraught nature of the negotiations.

In total, TfL has been handed £6bn to keep it afloat since the outbreak of COVID in the spring of 2020.

On Wednesday, Mr Khan said he would provide an additional £500m of funding to TfL, triggering suggestions of council tax hikes for inflation-hit Londoners.

The London mayor had also warned of significant cuts to services prior to the latest deal being struck, while he said last month that a "significant funding gap" remained and would likely mean fare increases.

Pensions reform remaining a contentious issue at TfL at a time when much of Britain's public transport network is being affected by industrial action.

It was unclear on Wednesday evening whether Mr Byford, who is said by colleagues to have been an inspirational leader during the challenges of the past two years, intended to remain in the UK or whether he had another job offer lined up.

Mr Lord joined TfL in 2019 and is responsible for overall management of the London Underground network.

Mr Khan, who chairs TfL, is nevertheless expected to conduct a comprehensive external search for a new commissioner.

Appointed in May 2020, just weeks after London was put into its first coronavirus lockdown, Mr Byford arrived with a stellar track record as the former president and chief executive of the New York Transit Authority, where he was credited with modernising a troubled public transport system.

He also ran the equivalent network in Toronto, Canada, while he has also held roles in New South Wales, Australia, and at a number of UK rail operators.

Mr Byford began his career as a graduate trainee at London Underground in 1989, eventually becoming general manager for customer service on the Bakerloo, Central and Victoria lines.

Among the other key operational moments during his tenure were this year's Platinum Jubilee and the mourning period following the death of Her Majesty The Queen, when London saw an influx of visitors who wanted to pay their respects.

TfL is also responsible for licensing private hire companies including Uber Technologies, with which it fought several legal battles over its refusal to award the ride-hailing app a long-term deal.