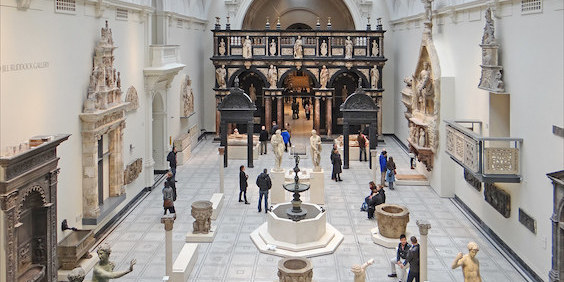 London’s Victoria & Albert Museum has entered consultation with staff over plans to cut 103 workers, or 10 percent of its workforce, to offset the financial downturn caused by the continuing Covid-19 crisis. Most of the job losses will be in the front-facing retail and visitor experience departments, which have been among those most affected by the pandemic.
While voluntary redundancy is open to staff in all departments of the institution, only workers in the aforementioned sectors face layoffs.

The Public and Commercial Services Union, which represents the museum workers, slammed the move, saying, “Management’s decision to immediately enter a consultation for compulsory redundancy for front of house workers, while running a voluntary-only redundancy scheme for all other departments, is a direct attack on the most diverse and some of the lowest paid workers at the museum.”

Prior to 2020, the V&A had enjoyed three of its most successful years to date, with 55 percent of its income generated through ticket sales, merchandise, events, and rentals.

Following its five-month closure in response to Covid-19, the museum reopened its doors to the sound of crickets-and local crickets as that, given the institution’s reduced-capacity rules and the collapse of tourism.

The museum attempted to cope by eliminating staff bonuses and reducing its public hours to five days a week, but the measures, even combined with emergency government support lasting only through March 2021, were not enough.

“With visitor figures currently down by 85% and likely to remain severely depressed for some time, we anticipate that our financial recovery will take several years, and are facing the very real prospect that we might never return to the level of visitation and associated income we were able to generate pre-Covid-19,” the institution said in a statement. The museum expects to make further cuts, affecting “staff at all levels across every department.”
#COVID-19  #Covid
Add Comment