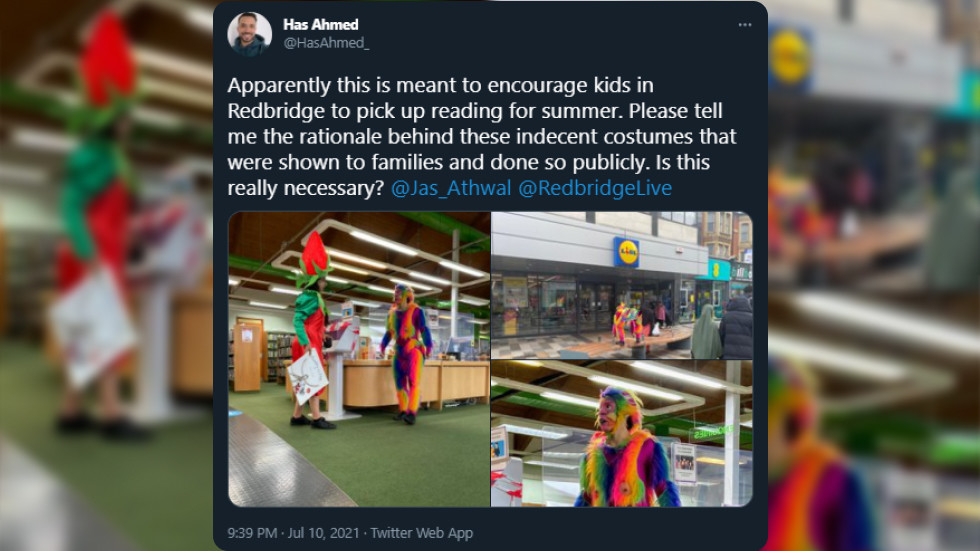 Officials in London's Redbridge borough were left red-faced after a library event designed to promote reading among kids featured a monkey character in a costume that included dangling fake genitalia and exposed buttocks.

The costume and the actor wearing it came from Mandinga Arts, a troupe of street performers based in Clapham South that has "a distinctive style bringing together live music, carnival, street costume, puppetry and dance, drawing on diverse influences from Europe, Latin America, the Caribbean and Africa," according to its website. The well-endowed monkey was part of one of the group’s walkabout acts.

Whether this particular style of costume was appropriate for an audience of minors is debatable. Many people complaining on social media believe the answer was a definitive "No."

Redbridge Libraries acknowledged the lapse in judgement and apologized for hosting the performance, but shifted the blame onto the charity Vision. It was they, rather than the borough council, who were responsible for organizing the event, the statement said.

The mischievous rainbow-coloured creature was promoting the Summer Reading Challenge, a campaign encouraging literacy and reading during the summer holidays among children aged between four and 11 years.

"Upon receiving complaints passed on by the Leader and Deputy Leader, we ceased the performance and are truly apologetic for the distress caused to residents. This will never happen again," the officials pledged.

Council leader Jas Athwal called the situation "disgusting" and said the charity had confirmed to him that all scheduled events were cancelled, but he likewise distanced himself from the controversy.

The Mandinga Arts troupe has a record of working with Redbridge Libraries in the past. For instance, they participated in the Day of the Dead celebration earlier this year, and also in previous years.

Some of the online ire over the episode was directed at the Labour Party, which dominates Redbridge Council. One popular tweet claimed that the party members "commissioned" the monkey and then acted dismissive towards people complaining about it. Athwal, a Labour politician, said in response that he would not "take lectures from a Johnny come lately."

This does not, however, appear to have anything to do with party politics. This year Mama G promoted the Summer Reading Challenge for Kent Libraries. Kent Borough Council is firmly Conservative.