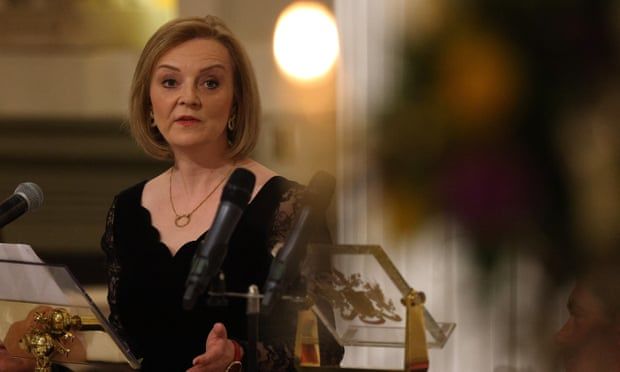 The foreign secretary’s belligerent comments on Russia reduce Ukraine to a pawn in the Conservatives’ power struggle, says Guardian columnist Simon Jenkins
The foreign secretary, Liz Truss, is playing with fire. On Wednesday night she described Russia’s Vladimir Putin as a “rogue operator” lacking rationality, and with “no interest in international norms”. As a result, she said: “We will keep going further and faster to push Russia out of the whole of Ukraine.” She is clearly revelling in her imagined proxy war on the Russian bear and no one in Whitehall appears able to restrain her.

The use of the word “we” publicly identifies Britain’s interests with Kyiv’s. Truss calls for ever more economic and military aid to be sent to Ukraine, and such aid now teeters on the brink of overt engagement with Russia. She appears to want Russia’s other dissident neighbours, Moldova and Georgia, to join the alliance. Though Putin is irrational and unreliable, Truss argues that he is susceptible to deterrence and will not react recklessly to her escalating belligerence. She nowhere mentions the risk involved in her desired escalation, let alone the possible compromises of peace. Hers is tabloid diplomacy.

Before his stunt visit to Kyiv this month, Boris Johnson also instructed Volodymyr Zelenskiy not to make any concessions to Putin, a line Truss is clearly seeking to rival. It is not unknown for democratic leaders to play war games to excite their electorates, but this must be the first Tory leadership contest fought on the frontiers of Russia.

It is hard to imagine a more delicate and dangerous time for such antics than now. Ukraine is seeing some of the most appalling atrocities since the second world war and the conflict in the former Yugoslavia. There is no conceivable excuse for what Putin is doing to his neighbour. But the burning issue is not the awfulness of war. It is what can be done to stop it.

It naturally suits a desperate Ukraine to claim the present conflict threatens to spill beyond its borders and into Europe more broadly. In reality, Ukraine has for eight years experienced a separatist conflict. That conflict did not necessitate the involvement of the rest of Europe or the US. But Truss declares that Putin wants to inflict “untold further misery across Europe”. She offers no evidence for what is a gross and alarmist assumption, with the implied need for western military retaliation.

Putin may be a monster and a liar and we are right to send aid to the people he oppresses, but a strategist should look beyond insults to assess risks and probabilities on the ground. This moment of maximum danger demands all the judgment and skill that narrowly resolved Cuba in 1962. We should remember then that both sides had to climb down.

So far in this dispute, Nato has operated with impressive self-discipline. It has laid down the parameters of its aid to Ukraine and stuck to them. Two decades of highly provocative Nato encirclement of Russia halted at Georgia and Ukraine in the knowledge that going further would permanently inflame Moscow. Nato stayed aloof from Russia’s Crimea and Donbas occupations. Putin’s assault on Kyiv this spring was of a different order, but again Nato calibrated its response. It was able to present a united front to Russia while not inviting Moscow to retaliate beyond Ukraine’s borders.

Neither western sanctions nor military aid to Ukraine appear to have deterred Putin one iota. They have vastly increased the cost to Russia of his invasion, but as western democracies know well, the cost of military adventures doesn’t always impact policy. Putin will settle as and when he feels he has reached his military limit, which is why there is good reason for sending Kyiv weapons. It is also a reason for the common humanity of welcoming Ukrainian refugees, which Johnson’s immigration policy has hypocritically denied. None of this is a reason for willing the conflict to continue, let alone risking Nato being drawn into the fight. Apart from anything else, a war with Nato would hugely reinforce Putin’s domestic popularity.

As was indicated in the Minsk negotiations of 2015 and mooted in Istanbul in March, there will have to be compromise if this is not to become an ongoing agony. An eventual deal will have to embrace Ukraine’s security and a degree of autonomy for Donbas. This will be messy. It cannot award Putin victory but it would probably acknowledge the “Russian-ness” of Crimea and south-east Ukraine, if not of Odesa. There have been indications that Zelenskiy will accept something of this sort. Yet it is precisely such an outcome that Johnson and Truss now oppose, hoping to boost support from belligerents – and defence lobbyists – within the Tory party.

The cruelties inflicted by states on other states should always be condemned by the wider world. But condemnation is one thing, fighting another. When states interfere in the affairs of others it is usually, if not always, bloody and unsuccessful. Ukraine appears to be approaching what could be a final battle with Russia in the south, possibly followed by stalemate and some sort of settlement. The worst thing Zelenskiy could face is western allies in the US and Britain both led by politicians, Joe Biden and Johnson, who feel they are too weak domestically to support him in the compromises of peace.

Johnson and Truss have not declared that a Ukrainian deal is for Zelenskiy and his people to decide. They want him to keep fighting for as long as it takes for Russia to be utterly defeated. They need a triumph in their proxy war. Meanwhile anyone who disagrees with them can be dismissed as a weakling, a coward or pro-Putin. That this conflict should be hijacked by Britain for a squalid forthcoming leadership contest is sickening.
#Boris Johnson  #Joe Biden  #Johnson
Add Comment