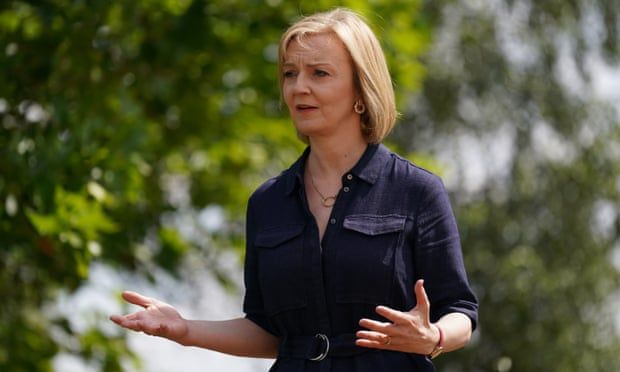 Tory leadership frontrunner wants rent payments to be used as part of mortgage affordability assessments
Liz Truss has pledged to help millions of renters buy their first home by making it easier to prove they are ready to take on a mortgage, but said she plans to scrap national housebuilding targets.

The frontrunner in the Tory leadership contest vowed to “break down barriers” to support those keen to get on the housing ladder.

A day after outcry over rival Rishi Sunak’s plan to block new residential property being built on the green belt, which experts said would only exacerbate the housing crisis, Truss risked sparking similar criticism by saying she wanted to abandon “top-down Whitehall-imposed housing targets”.

Official statistics show that more than half of current renters could afford a mortgage, but only 6% are able to access a typical first-time buyer mortgage due to most lenders not taking an applicant’s ability to pay a certain amount of rent as proof that they can afford to pay a higher mortgage.

Truss said to help “generation rent”, an upcoming review of the system would allow rent payments to be used as part of the affordability assessment for a mortgage.

The government is committed to building 300,000 new homes by the mid-2020s but Truss wants to “rip up the red tape that is holding back housebuilding” by binning the target.

Councils will instead get to choose how many new homes their communities need to build, her team said. But a Truss administration would “work with local communities to identify sites ripe for redevelopment and reduce planning restrictions – turbocharging commercial and residential development”.

The South West Norfolk MP said: “As a former councillor, I remember those painful hours sitting through planning committees. I’ll put power back in local councillors’ hands who know far better than Whitehall what their communities want.”

Labour sources pointed to the party’s own analysis of English housing survey data, which suggested 211,000 fewer people of working age were homeowners in 2020-21 than in 2009-10. In the same period, rates of private renting shot up, Labour said.

It came after the Greater London Authority (GLA) warned developers in three boroughs that housebuilding in parts of the west of the capital could be delayed due to a shortage of capacity in the power grid.

A spokesperson for one of the councils, Ealing, said that “in the middle of an affordable housing crisis … it is vital that we are able to continue building new, genuinely affordable homes to let”.
Add Comment