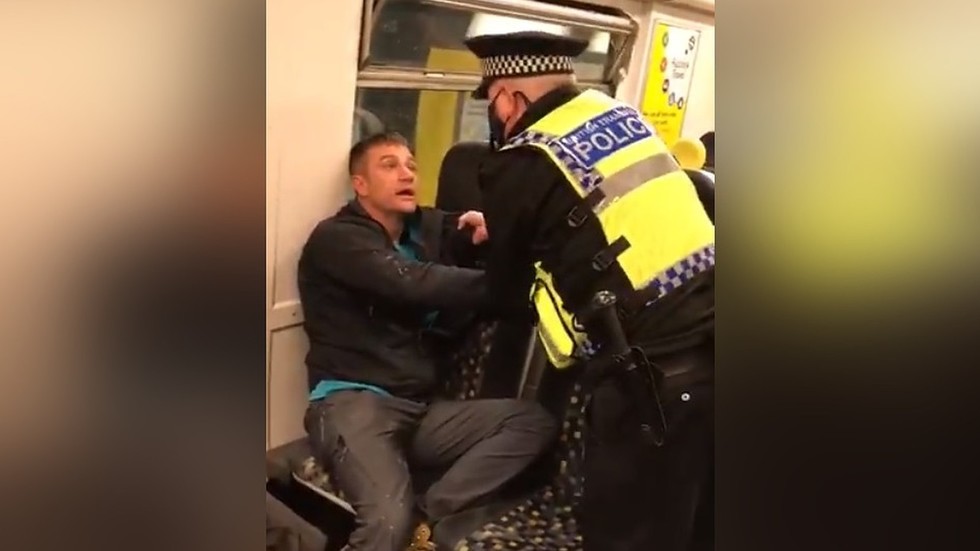 British Transport Police has been pelted with virtual tomatoes online after an officer was filmed trying to heavy-handedly enforce the mask-wearing order on a stubborn passenger, ending up in an intense one-on-one scuffle.

The footage has caught the eye of multiple viewers and shows a uniformed Liverpool transport police officer in the middle of a heated argument with a commuter, who’d apparently refused to wear a compulsory mask. “I do not have to wear a mask,” he insists, adding it’s “against the law to challenge me.”

Meanwhile, a man filming is heard adding, “underlying health conditions, you don’t have to wear a mask.” Face coverings are mandatory to wear on public transport in the UK, unless a passenger reports having a medical condition that prevents them from doing so.

“I’m not going to ask you anymore. Get off or we’re taking you off,” the officer tells the passenger seconds before the scuffle breaks out. “Get off me! Who the f**k do you think you’re grabbing?” the rider shouts as the scuffle continues and he tries to avoid being restrained.

The confrontation turned more violent after the officer tried to apply handcuffs and pepper-sprayed the man. During the struggle, the man’s shirt comes off.

More police tyranny all for not wearing a mask pic.twitter.com/4XRafCTWOz

The video garnered scores of views and shares by Friday afternoon, with tweets of support for the man who “stands tall for his freedom” and calls to “discipline the officer and overturn this madness.”

Others, however, said the man should have presented an exemption certificate to prove he had underlying health conditions.

Underlying health conditions.... Then he should prove it by having an exemption certificate. Simple. Looked as fit as fiddle.

British Transport Police (BTP) which is responsible for ensuring the safety of passengers and infrastructure, delved into the debate later in the day, confirming that they were aware of the viral footage. The agency said the officer responded to a report of a person “spitting at two passengers,” adding he was charged with “a public order offence and assaulting an emergency worker.

The explanation didn’t sit particularly well with online commenters, who bombarded the BTP page with questions and accusations. “If the officer was there because he was spitting at people why is the conversation about masks?” one asked. Further responses pointed out the officer in the video made no mention of breaching of public order.

Some agitated netizens even went as far as to liken the BTP tactics with those of the Third Reich’s notorious police. “Absolutely disgusting behaviour by your officer all because he was exempt from wearing a mask. This isn’t 1930s Germany,” one comment reads.

The drama happened at a time when lifting lockdown measures – or keeping them in place –is being debated across the UK. While masks and hygienic measures remain compulsory, businesses and public venues have begun to gradually open up. Meanwhile, some Britons voiced stiff opposition to compulsory mask-wearing.

In late-August, thousands of people gathered in London, demanding a return to normal and blasting the ongoing Covid-19 epidemic as a hoax. The march, widely covered on social media, received plenty of backlash from the printed press, for participants’ not adhering to social distancing and not wearing masks.