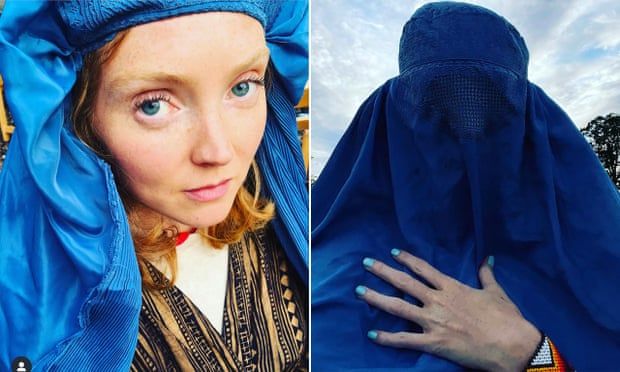 Model accused of ‘putting Instagram posturing before universal human rights’ after now-deleted post
Lily Cole has apologised for posting a photograph online in which she is wearing a burqa as part of an attempt to promote her new book.

The model and activist was criticised for posting in the same week as Kabul fell to the Taliban, raising fears for women’s rights in Afghanistan.

Her Instagram story, which has been deleted, contained two images: one of her in a blue burqa covering her face and body, and another in which the garment was pulled up to show her face.

Among those who challenged her was one Instagram user who told her that the Taliban forced women to wear the burqa.

It comes as women in Afghanistan speak out about their fears of hard-fought rights being taken away. In a Guardian report last week, one Kabul woman told of haggling with shopkeepers over rapidly inflating burqa prices.

As the Taliban’s final advance picked up pace, once again the burqa has been pulled out of dusty storerooms and cupboards by women who remember life under the Islamist group’s rule.

Cole subsequently wrote in a statement of apology that she had shared “an old photo” of her wearing a burqa that had been loaned by a friend.

“As she pointed out I was undermining its original purpose by wearing it with my face exposed, but I understand why the image has upset people and want to sincerely apologise for any offence caused,” Cole said.

“I hadn’t read the news at the time I posted so it was incredibly ill timed. Thank you for pointing that out to me.”

She said her heart was breaking as she read about events in Afghanistan and she was looking for organisations who were helping women on the ground there.

The columnist Janice Turner wrote of the model’s original post: “Lily Cole and the vacuity of modern hashtag-feminism. Putting Instagram posturing before universal human rights. I bet Afghan women are celebrating the ‘diversity’ of wearing this shroud.”

Cole’s original post had been used to promote her new book, Who Cares Wins. Its publisher, Penguin, bills it as providing “a plethora of solutions guaranteed to inspire and create lasting global change”.
#Afghanistan
Add Comment