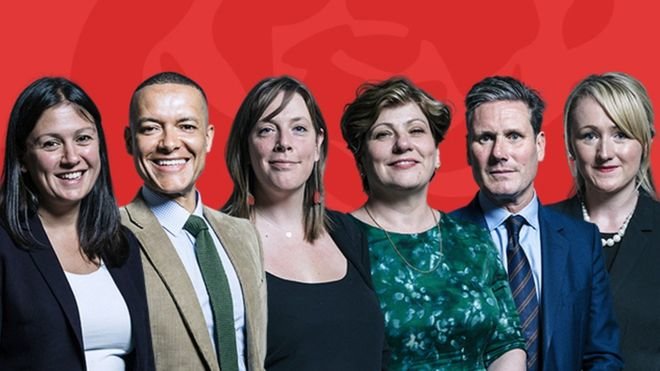 Labour's ruling body: Rules for contest to be decided

Labour's ruling body will meet on Monday to agree the timetable for the party's leadership race and the rules for the forthcoming contest.
Five MPs - Clive Lewis, Lisa Nandy, Jess Phillips, Sir Keir Starmer and Emily Thornberry - have so far entered the running to succeed Jeremy Corbyn.

Party officials will decide the length of the contest and who can vote in it.

The BBC's Iain Watson said decisions on the eligibility of new members and registered supporters could be crucial.

More than 500,000 people took part in the last leadership contest, when Mr Corbyn was re-elected in 2016.

Mr Corbyn signalled his intention to stand down last month after Labour lost its fourth general election in a row and his second as leader. His successor is expected to be in place before council and mayoral elections at the start of May.

Labour's National Executive Committee, the party's governing body, will meet to determine how the contest will be conducted, the day before Parliament returns from its Christmas recess.

In order to qualify to take part, candidates need the support of at least 21 MPs, as well as the backing of at least 5% of constituency parties or three affiliated bodies - two of which must be trade unions.

One of the key issues to be decided is the "cut-off" period for people who are not currently full members of the party and who want to vote.

Under the current rules, anyone in this position would have at least two weeks to sign up - but this deadline could be extended.

If this happens, it is likely to favour candidates such as Jess Phillips and Lisa Nandy, who are looking to win back former supporters of the party disillusioned about its direction under Mr Corbyn.

In contrast, those contenders who appear to be more popular with the current left-wing and pro-Remain membership, such as Keir Starmer and Rebecca Long-Bailey, are likely to benefit from a more restricted timetable.

The NEC will also decide the rules around the participation of registered supporters.

Since 2015, non-party members have been able to sign up temporarily at a reduced cost to cast a vote. When Mr Corbyn first became leader in 2015, people were given two months to sign up for a small fee of £3.

A year later, the NEC gave them just two days - and the fee went up to £25. However, more people signed up in 2016, with about 120,000 registered supporters ultimately taking part.

The NEC is an elected body made of up parliamentarians, councillors, trade unionists and constituency party members.

While Ms Long-Bailey is entitled to attend as one of three shadow cabinet members, the shadow business secretary is expected to be absent as she is likely to enter the leadership contest herself in the coming days.

Labour will also set the rules for its deputy leadership election, after Tom Watson stood down at last month's general election.
Add Comment