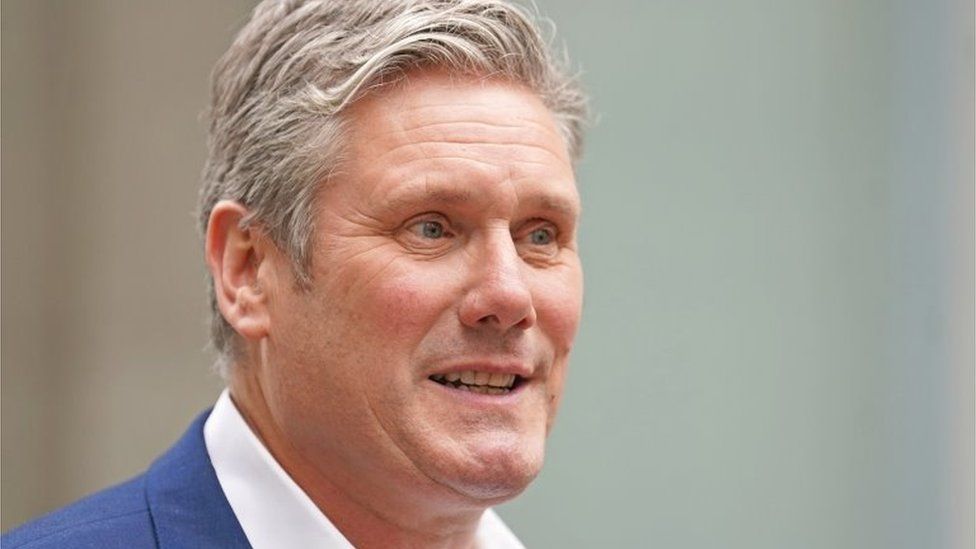 Dominic Raab has accused Sir Keir Starmer of "hypocrisy" after police launched an investigation into whether he breached Covid rules in 2021.

The deputy PM stopped short of calling for the Labour leader to quit over what he called "rank double standards".

But he said Sir Keir had "a bunch of questions to answer" about the event.

Labour's Lisa Nandy said the gathering at a Labour MP's office was a work event and it was "absurd" to compare it to Boris Johnson's "serial partying".

When the Metropolitan Police launched an investigation into Covid rule-breaking in No 10 in January, Sir Keir said the PM should quit, but the Labour leader has now ruled out resigning himself.

Asked if Sir Keir should resign, Ms Nandy told the BBC's Sunday Morning show the two situations were "not the same".

She argued that to compare that with "a work meeting where people stopped to eat" was "pretty desperate" and accused the Conservatives and "their cheerleaders in the media" of "flinging mud".

And she insisted that as a former director of public prosecutions - in charge of the Crown Prosecution Service - Sir Keir was "not the sort of man to tear up the rulebook". In a Sky News interview, she described her leader as "Mr Rules".

But Justice Secretary and Deputy Prime Minister Mr Raab said the Labour leader was guilty of "complete hypocrisy" and had "a bunch of questions to answer" about the Durham event.

He avoided saying whether he thought the Labour leader should resign, saying the government was focused on issues that mattered more to voters, such as the cost of living.

Labour has cancelled an event for Monday in which Sir Keir was due to give a speech and take questions from journalists ahead of Tuesday's Queen's Speech.

The Institute for Government think tank, which was hosting the event, was not given any specific reasons for why Labour had cancelled it.

Sir Keir Starmer is in an excruciatingly uncomfortable position.

There were Labour gains in Thursday's local elections, but the focus is now not on those, or Conservative losses. It's on him.

Sir Keir has tried to present himself as a contrast to Boris Johnson, highlighting his own past prosecuting lawbreakers as the head of the Crown Prosecution Service. Earlier today, one of his shadow cabinet members dubbed the Labour leader "Mr Rules".

And Sir Keir wasted no time in calling on Mr Johnson to resign when the PM came under police investigation.

But now, while he waits for Durham Police to complete their new investigation into his behaviour, he's hamstrung. He's unable to criticise the prime minister on the issue.

The Conservatives are in a tricky position too. The police are still investigating Mr Johnson and multiple events in Downing Street, and the PM has already been found to have broken the law.

If they now say the Labour leader should go, how can they defend their own prime minister?

Until the police complete their inquiries it's messy for all involved.

In April 2021, Sir Keir was filmed drinking a beer in the constituency office of a Durham MP in the run-up to the Hartlepool by-election.

The Labour leader has insisted the visit was within in the rules as it was a work event - with food and drink being consumed in between doing work.

But an internal memo for the trip, obtained by the Mail on Sunday, scheduled an hour and twenty minutes for "dinner" - after which, the visit would conclude.

The coronavirus rules in place at the time meant it was illegal for people in England to socialise indoors with people from outside their household or support bubble.

There was an exemption for "work purposes", although working from home was recommended in the guidance, but the rules did not mention socialising at work.

Describing the April 2021 meal earlier this week, Sir Keir said that "at various points people went through to the kitchen, got a plate, had something to eat, and got on with their work". He has also previously insisted he returned to work afterwards.

Durham police reviewed the footage in February and said they did not believe an offence had been committed.

But after Thursday's local elections, the police said they had received "significant new information over recent days".

"We can confirm that an investigation into potential breaches of Covid-19 regulations relating to this gathering is now being conducted," the force said in a statement.

Asked about the Labour leader's future, Liberal Democrat leader Sir Ed Davey said no-one was "above the law" and that it would be "extremely difficult" for a politician to continue after being fined by the police.

Speaking to reporters on Saturday, Sir Keir said he would not resign and that he would lead Labour into the next general election.

However, senior Labour backbencher Diane Abbott - a close ally of Sir Keir's predecessor Jeremy Corbyn - said he should consider his position if he receives a police fine.

In January, the Labour leader tweeted: "after months of denials the prime minister is now under criminal investigations for breaking his own lockdown laws. He needs to do the decent thing and resign".

The Metropolitan Police are continuing their investigation into 12 gatherings held in Downing Street and the Cabinet Office during 2020 and 2021.

Last month, Mr Johnson, his wife Carrie and the Chancellor Rishi Sunak, were fined by the police for attending a birthday gathering in Downing Street in June 2020.