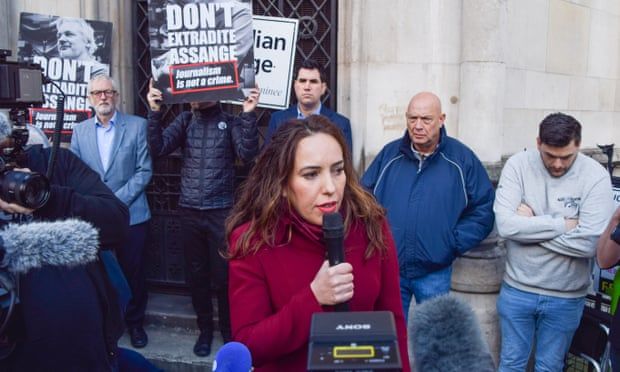 Julian Assange and fiancee claim they are being blocked from marrying

The action accuses the justice secretary and Jenny Louis, who runs the prison where the WikiLeaks co-founder is being held while the US is seeking his extradition, of denying the human rights of the couple and their two children.

They say they have had no response to repeated requests seeking agreement that a ceremony can take place at the prison.

Moris, a lawyer, linked the lack of response by British officials to the hostility towards WikiLeaks on the part of the US, where authorities were accused recently of plotting to kill or kidnap Assange during the years he was in the Ecuadorian embassy in London.

Last month, during an appeal by the US against a ruling that Assange cannot be extradited, his lawyers cited fresh allegations that the CIA plotted to kidnap or kill him as “grounds for fearing what will be done to him” if he was extradited to the US to face espionage charges.

“We are suing because creepy elements of the UK government are illegally blocking and delaying our marriage by effectively giving the US government veto power,” Moris said on Twitter on Sunday. “Our request to marry is now in the hands of the CPS [Crown Prosecution Service], which acts for the US in #Assangecase.

“We have initiated legal action because UK authorities have erected a total and indefinite barrier not only to marrying, but even to beginning the statutory process to marry. This behaviour by the UK government is unfair, irrational and sinister.”

A formal request was made by Assange to the governor’s office on 7 October for agreement that a wedding could take place. Several days later, the couple’s lawyers asked the prison to grant permission for Moris and a registrar from Greenwich Register Office to visit the prison so the couple could give notice of their intention to wed.

The legal action says the lack of responses to these requests creates “a total and indefinite barrier not only to the claimants marrying, but even to them beginning the statutory process for the same”.

Louis has reportedly told the couple’s legal team she was obliged to refer the wedding request to the Crown Prosecution Service. However, those lawyers say this is irrelevant as there are no UK charges against him.

Raab and Louis, who are also accused in the action of abusing their power over Assange, have been given until 12 November to respond. The Ministry of Justice has been approached for comment.
#Dominic Raab  #Raab
Add Comment