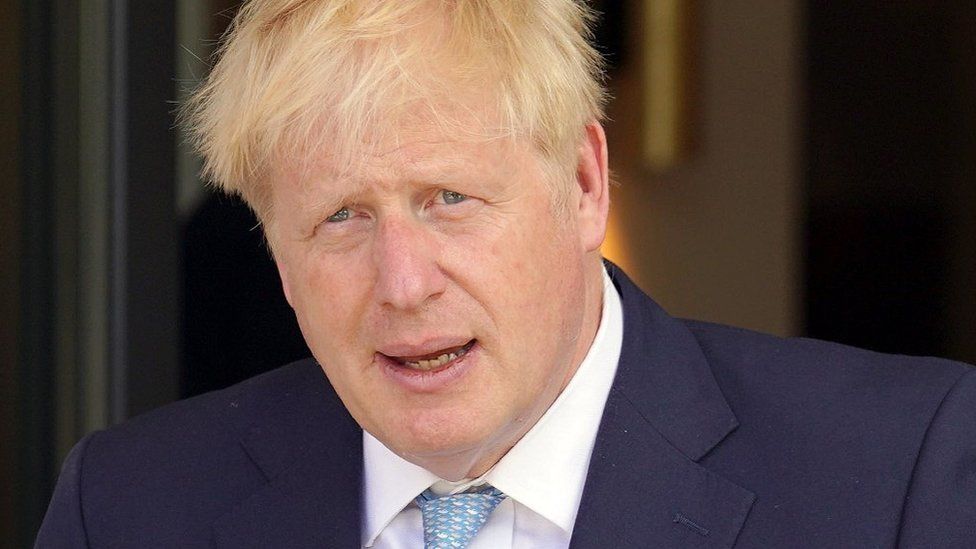 Johnson will lead Tories at next election, says Brandon Lewis

Boris Johnson has the drive to keep going as PM, despite two by-election defeats for the Conservatives, cabinet minister Brandon Lewis says.

The PM is facing criticism after Thursday's losses of Wakefield and Tiverton and Honiton but said he is planning for a third term in office.

Labour and the Lib Dems have urged him to resign and one Tory MP wants party rules to change so he can be ousted.

But Mr Lewis said the PM would lead the Tories past the next general election.

Thursday's by-elections followed months of criticism of Mr Johnson over Covid rule-breaking parties in Downing Street and came amid the highest rate of inflation in 40 years.

Labour took back Wakefield in West Yorkshire, which it had lost to the Tories in 2019, while the Lib Dems overturned a 24,000 Conservative majority to win Tiverton and Honiton, in Devon. Following the defeats Tory party co-chairman Oliver Dowden resigned.

The by-election defeats have also led to increased criticism of Mr Johnson, who won a vote of confidence in his leadership among Tory MPs earlier this month, but with 41% saying they did not want him to continue.

On Friday former Conservative leader Lord Howard told the BBC that the prime minister should go.

But asked if he would like to serve a full second term in office, Mr Johnson said: "At the moment I'm thinking actively about the third term and what could happen then, but I will review that when I get to it."

Speaking to reporters in Kigali, Rwanda, where he has been at the Commonwealth Heads of Government meeting, the prime minister was asked to elaborate on his comment, replying that he was thinking "about a third term - mid 2030s".

Downing Street later suggested he had been joking.

Asked on BBC One's Sunday Morning programme if Mr Johnson's comments had been serious, Mr Lewis replied: "Yes, but let's be clear about what he is saying.

"We often as politicians, particularly when you're in government, get criticised for making decisions looking at the next week, the next election, the next year, and not looking long term"

"What I think is really good with this prime minister - and I see this every day - is his enthusiasm and drive to deliver for our country."

Mr Lewis, the Northern Ireland secretary, said Mr Johnson was "the person who will lead us successfully through the next general election".

He also took a swipe at Lord Howard, who was defeated by Labour leader Tony Blair at the 2005 general election.

"With all great respect to Michael Howard, who sadly wasn't able to win an election when he led our party, I think we have got somebody who has a proven record of winning elections, both as London mayor but also as prime minister in 2019," he said.

For Labour, shadow foreign secretary David Lammy said the Conservatives had lost the by-elections because voters no longer had "faith, confidence, trust in Boris Johnson".

"They thought he lacked integrity and they didn't think that Boris Johnson was waking up every morning thinking about their concerns," he told Sunday Morning.

Liberal Democrat leader Sir Ed Davey said: "People are very upset about our prime minister and they wanted to send a clear message to Conservative MPs that Boris Johnson has got to go."

Both opposition parties denied they had made any form of election pact to lend support to each other, after Liberal Democrats benefitted from a collapse in the Labour vote in Tiverton and Honiton, and Labour won after the Liberal Democrat vote slumped in Wakefield.

"You're seeing the voters work out for themselves who to get behind if they want to punish Boris Johnson," Mr Davy said.

Mr Lammy said: "We fight for every single seat. The British people do not want politicians to stitch up who wins an election in formal pacts.

"There will be no pacts with any political party before the next general election."

As several Labour MPs defied leader Sir Keir Starmer's warning not to join picket lines during the rail strike, Mr Lammy said he expected the chief whip would speak to them and remind them that "a serious party of government does not join picket lines".

He said the party had to be prepared to sit down with both striking workers and management to resolve disputes if it was to lead the country.

Conservative backbench MP Andrew Bridgen, a longstanding critic of Mr Johnson, confirmed he wanted the party's rules changed so the leader could face another vote of confidence within the next 12 months.

Under the current rules, Mr Johnson is technically safe from a challenge until next June.

"The leader of the party should normally be more popular than the party itself, but what we're seeing with Johnson is he's a huge drag on the ticket."