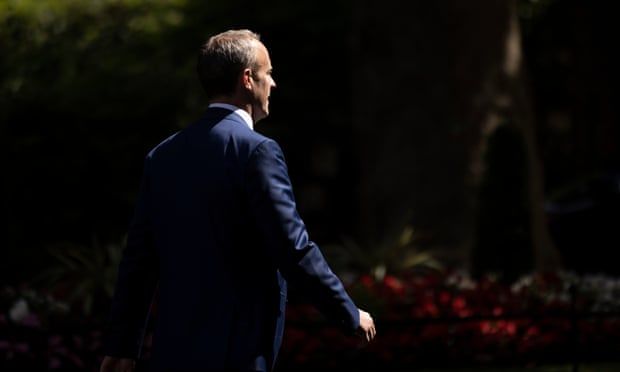 Johnson loyalists jump or are pushed on to ministerial scrapheap

It’s not just Boris Johnson who is yesterday’s man: a throng of his administration’s most memorable faces are now on the ministerial scrapheap. Some jumped, some were pushed, but most have probably performed their final spell in government.

They were once loyal footsoldiers who went out to defend the indefensible on the morning broadcast rounds and when urgent questions were granted on embarrassing subjects in the Commons.

But now, as one outgoing adviser put it, Malcolm Tucker’s withering putdown of an MP in The Thick of It will be ringing in their ears: “You’re so backbench, you’ve actually fucking fallen off.”

The pre-briefed nature of the reshuffle meant many knew their fate.

Thérèse Coffey eagerly told officials in the Department for Work and Pensions on Monday about her impending promotion to deputy prime minister and her move to running the Department of Health and Social Care – becoming the first woman to hold that post.

Several of those expecting to face the chop drowned their sorrows in the dying light of a warm autumn evening on the Commons terrace, perched carefree with their top buttons undone.

Despite pleas for party unity, Truss wasted no time in doling out punishments for those who had backed Rishi Sunak for the leadership.

At the top of the list was Raab, defenestrated as deputy prime minister and justice secretary. His warning last month that Truss’s tax plans were “electoral suicide” for the Tories were seen by her campaign as beyond the pale.

He was a mainstay of the Johnson era, famously arguing during the Partygate scandal that a gathering of government workers in the Downing Street garden with cheese and wine did not break Covid laws because attenders were “all in suits”.

Having served through the May and Johnson administrations, and despite having co-authored a book with Truss, he has now found himself out in the cold. Given his small majority in a Liberal Democrat-facing marginal of 2,700, more rubbing of shoulders with his constituents might be time well spent.

Even closer to Johnson and turfed out of government was Barclay. Brought in as chief of staff in No 10 while running the Cabinet Office in a last-ditch effort to professionalise the operation as the wheels were coming off, he was dispatched from his latest post as health secretary.

A government source claimed he had had to be prodded several times in recent weeks to share updates on plans for protecting the health service during the winter.

Shapps, known as the “number man” for running the spreadsheet during the no confidence vote in Johnson, came to the end of the road as transport secretary.

All three waited until the bitter end, being told by Truss their services were no longer required.

Some of Johnson’s most vehement supporters saw which was the wind was blowing and ensured they exited on their own terms. Patel, who failed to muster even enough supporters to launch a leadership bid at the start of the summer, announced on Monday she was heading for the backbenches.

Long criticised by colleagues for failing to deliver on her promise to bring down the number of people arriving on small boats across the Channel, Patel post-dated her resignation letter to take effect from the following day.

Never one to go quietly, Dorries bowed out as culture secretary but could not resist ensuring everyone knew she had been asked to stay on by Truss but turned the opportunity down. Having riled colleagues with her outspoken barbs during the leadership election, Dorries even took a pop at fellow Tory MPs by saying some of them looked down on her because of her scouse accent.

Another diehard Johnson ally to bow out was Adams – a lesser-known figure who helped run the shadow whipping operation when the former prime minister’s support was nearly at its lowest ebb in February.

While Truss’s critics cast her as the “continuity candidate” and she has retained figures such as Jacob Rees-Mogg, Kwasi Kwarteng and James Cleverly, the cast of characters around her will look and feel different.

Sunak is also likely to fade into the background, and Michael Gove – sacked by Johnson – seems happy to do the same.

Some of those who are departing the stage will enjoy a spell away from the limelight. Others will relish their new freedom to aim potshots at the government, still popping up regularly in the chamber but from their newly established naughty corner.

But one of the greatest fears of a former frontline politician is realising how disposable they were. They will not want to hang around unwanted, or be sneered at by the next crop of bright young things for trying to cling to relevance. They will have to reinvent themselves to stand a chance of a political revival.