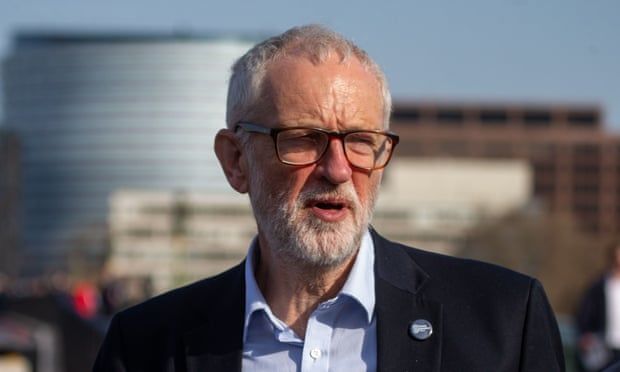 Jeremy Corbyn would like to see Nato ‘ultimately disband’

In comments that are likely to inflame further tensions with Labour HQ, Corbyn said he did not blame Nato for the Russian invasion of Ukraine but that it had to be looked at in historical context.

Corbyn is currently suspended from holding the Labour whip after comments made in the wake of the Equality and Human Rights Commission report into antisemitism in the party under his leadership.

The Islington North MP said that people should “look at the process that could happen at the end of the Ukraine war” and questioned: “Do military alliances bring peace?”

“I would want to see a world where we start to ultimately disband all military alliances,” he told Times Radio. “The issue has to be: what’s the best way of bringing about peace in the future? Is it by more alliances? Is it by more military buildup?

“Or is it by stopping the war in Ukraine and the other wars … that are going on at the present time, which are also killing a very large number of people? And ask yourself the question: do military alliances bring peace? Or do they actually encourage each other and build up to a greater danger?

“I don’t blame Nato for the fact that Russia has invaded Ukraine. What I say is look at the thing historically, and look at the process that could happen at the end of the Ukraine war.”

The former leader said he would be “supporting Ukraine’s right to defend itself” if he was PM but would be focused on encouraging dialogue. Asked whether he backed Ukraine’s president, Volodymyr Zelenskiy, he said: “I’ve never met him. I don’t know … I think he speaks well and I admire that.”

Corbyn said the decision not to readmit him as a Labour MP was a “wrong, totally unjustified decision” by Labour leader Keir Starmer.

Starmer told the Guardian last week that further comments by Corbyn, including his support for the Stop the War Coalition, had made his readmittance more difficult, saying he expected all Labour MPs to be supportive of Nato and not to draw “false equivalence” between Russia and Nato.

Those comments led to a swift rebuttal from the former shadow chancellor John McDonnell, who said there had been commitment to Nato under Corbyn’s leadership.

“A commitment to Nato has been Labour policy democratically determined by party conference and accepted by every Labour leader for inclusion in every Labour manifesto, including by Jeremy Corbyn, since Nato’s inception,” he tweeted.

“If we can’t be honest in our assessments of Nato’s performance, lessons for how it performs its role in the future will never be learnt. On this basis I see no reason why Jeremy Corbyn doesn’t meet these new conditions for entitlement to the Labour whip.”
Add Comment