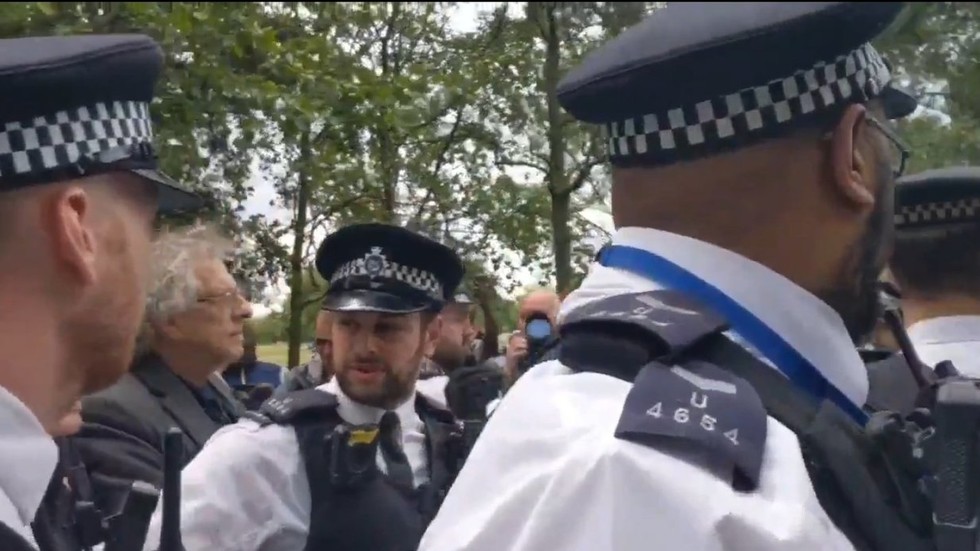 Piers Corbyn, the outspoken brother of the ex-Labour Party leader, was arrested after speaking at an anti-lockdown protest in London's Hyde Park. Footage shows him being cuffed and hauled away by police after refusing to disperse.

Armed with a megaphone, Corbyn warned the crowd of almost 50 demonstrators about alleged links between the coronavirus pandemic and 5G, claiming it 'enhances anyone who's got illness from Covid, so they work together.'

"They're telling us it's a pandemic. It's a pack of lies to brainwash you and keep you in order," he told a small crowd gathered around him.

Protesters boo as man led away in handcuffs by police at Hyde Park anti-lockdown protest pic.twitter.com/ZpCPqmsypG

He went on to speak about forced vaccinations and civil liberties, but was quickly encircled by police.

After a brief exchange, one of the officers put handcuffs on Corbyn after he reportedly refused to leave or provide his details.

In a video of the incident, a woman in the background can be heard shouting "They're arresting this guy for speaking out." The activist was then escorted to a police van.

At least five other people were detained during the event.

The arrest was criticized on social media, with some noting that the officers were not wearing masks.

Look at the sheer number of Police Officers present to arrest Jeremy Corbyn's brother Piers at Hyde Park corner for taking part in the Lockdown protest.

No masks to protect themselves or the public & the officer handling the loudspeaker Piers Corbyn had isn't wearing gloves. 🤦‍♂️ pic.twitter.com/9KKe5iw5YN

Others, though, applauded the arrest, arguing that the protesters were breaking social distancing guidelines and Corbyn was spreading disinformation and wasting police resources during the pandemic.

It’s not a word I use lightly but #PiersCorbyn is an absolute fruitcake. He has a conspiracy theory for everything. He’s wasted valuable police time and spreading damaging information in a time of pandemic #Shameonhim https://t.co/Bm5FFyGY13

However, exercising the right to assembly is still forbidden. As they hauled off some of the protesters from Hyde Park on Saturday, London’s Metropolitan Police warned the public that “protest, marches or assemblies are not permitted.” Health regulations that forbid large-scale gatherings are “still in force,” they said, adding that officers will be on the street to “encourage people to comply.” Presumably, this means arresting the likes of Piers Corbyn.

If you're out today, please remember that Health Protection Regulations remain in place:

❌ Protest, marches or assemblies are not permitted

Please be responsible and help reduce the risk to public health. Officers will engage and encourage people to comply with the conditions. pic.twitter.com/VOrTy2yLrd

While lockdown measures have been eased somewhat this week, most businesses remain closed. Social-distancing guidelines –which recommend people keep a two-metre distance from each other– have also not been loosened.