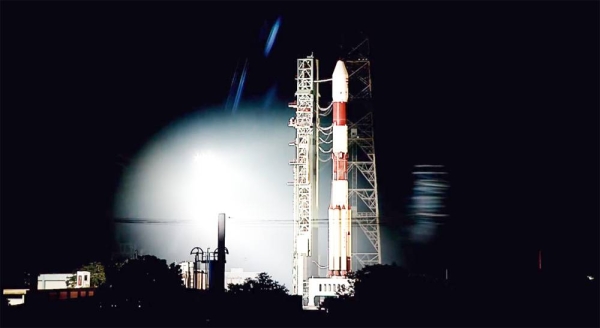 The Indian Space Research Organization (ISRO) launched a Polar Satellite Launch Vehicle with two smaller co-passenger satellites at 05.59 a.m. Monday from the First Launch Pad of Satish Dhawan Space Center at Sriharikota in Andhra Pradesh.
This was the ISRO's first launch mission of 2022, and the 25-hour countdown for which had started Sunday. The countdown process of 25 hours and 30 minutes leading to the launch had commenced at 04:29 hours Sunday, ISRO had tweeted.

The launch vehicle is designed to orbit an earth observation satellite EOS-04, weighing 1,710 kg into a sun synchronous polar orbit of 529 km.

Indian Minister of Road Transport and Highways Nitin Gadkari tweeted, “A proud moment for all Indians indeed! Heartiest congratulations to the team of ISRO on the successful launch of radar imaging satellite EOS-04 and two others onboard PSLV-C52.

“This mission will serve India in the sectors of agriculture, disaster management and assessment, carbon inventory, forest and plantation management and many more sectors.”

EOS-04 is a Radar Imaging Satellite designed to provide high quality images under all weather conditions for applications such as agriculture, forestry and plantations, soil moisture and hydrology and flood mapping.

The two smaller co-passenger satellites include a student satellite (INSPIREsat-1) from Indian Institute of Space Science and Technology (IIST) in association with Laboratory of Atmospheric and Space Physics at University of Colorado, Boulder. It is also contributed by NTU, Singapore, and NCU, Taiwan.

ISRO successfully launched its earth observation satellite EOS-4 and two co-passenger technology demonstrator and scientific satellites. “After a flight of about 17 minutes 34 seconds three satellites namely EOS-04, INSPIREsat-1 and INST-2TD were injected successfully into a sun-synchronous polar orbit of 529 km. The orbit achieved for the satellites is very close to the intended orbits,” the space agency said in a statement.

After separation, two solar arrays of EOS-04 deployed automatically and ISRO Telemetry Tracking and Command Network (ISTRAC) in Bengaluru assumed control. The satellite will be maneuvered to its final position and begin providing data in a few days.

This was the country’s first mission since the failure of the GSLV F10 mission in August 2021. The PSLV-C52/EOS-04 mission too has been delayed twice already due to the coronavirus pandemic. Initially planned for the third quarter of 2021, the launch got pushed to the fourth quarter and finally to early 2022.

This was the first mission of the space agency under the chairmanship of S. Somanath, who took over as the chairperson ISRO and secretary department of space in January.

Keeping his remarks short, the chairperson thanked his teams and said that the satellite was a big asset for the country. Somanath ended his less-than-a-minute long address with, “We will be back again with the next launch of PSLV very soon. Till then, goodbye.”

The spacecraft will also carry the INS-2DT technology demonstrator satellite, which has a thermal imaging camera and can help in the assessment of land and water surface temperatures apart from mapping vegetation.

ISRO is likely to target Chandrayaan-3 this year in August. The first development flight of the newly designed small satellite launch vehicle, which was to happen in the second half of 2021 has also been deferred.
#Coronavirus
Add Comment