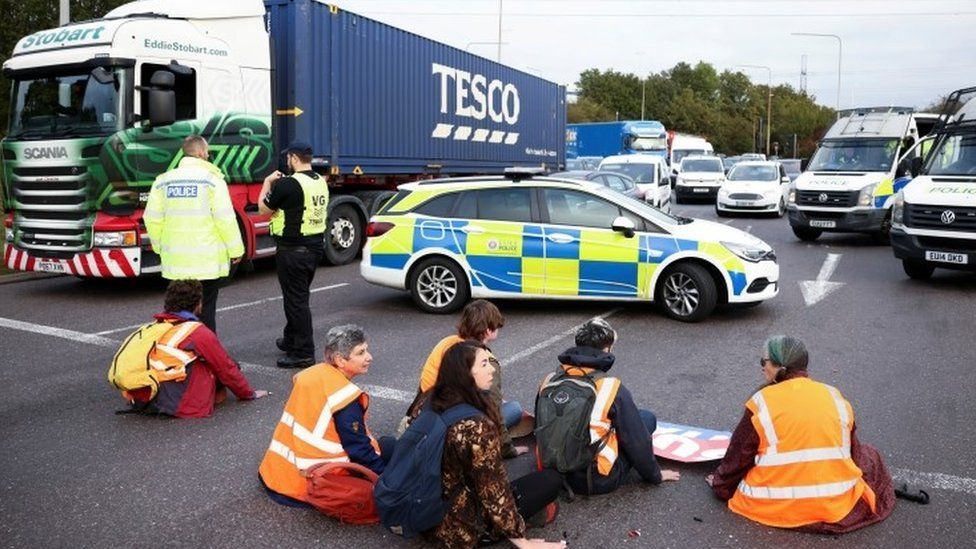 Judge Stephen Leake fines a group of M25 activists but says their "voices are certainly heard". The judge told of how he was "inspired" by Insulate Britain protesters as he fined some for holding a demonstration on the M25.

The group blocked traffic, including an ambulance with a patient, by sitting at junction 3 near Swanley, Kent.

Some activists glued themselves to the Tarmac, while another stuck himself to a police car on 29 September.

Some of the demonstrators appeared at Crawley Magistrates' Court on Tuesday, while others pleaded guilty by post.

Three protesters, Ian Bates, 63, from Northampton, Karen Matthews, 60, and 54-year-old Biff Whipster from Canterbury, Kent, were told by District Judge Stephen Leake they had "inspired" him after making speeches about their climate concerns while representing themselves.

But the judge added his role was to "apply the law" and said their actions had caused "significant disruption" to the motorway.

He said: "I have heard your voices. They have inspired me and personally I intend to do what I can to reduce my own impact on the planet, so to that extent your voices are certainly heard."

Whipster admitted criminal damage by gluing himself to a police car and was fined £120.

Mary Adams, 68, of Greenwich, south London, was fined £250 after the judge found her refusal to move out of the path of an ambulance a "serious" aggravating factor.

She had pleaded guilty to wilful obstruction of the highway, along with Margurite Doubleday, 67, Bethany Mogie, 39, from Hertfordshire, Xavier Gonzalez-Trimmer, 21 and from London, and Lucy Crawford, 52, from Cambridge.

The demonstration, one of a series held across the country by Insulate Britain, disrupted about 18,000 drivers, according to National Highways.

Five protesters, Tim Speers, Daniell Thomas, Peter Morgan, Louise Lancaster and Iain Webb, did not attend court. They were convicted of wilful obstruction after a trial in their absence.