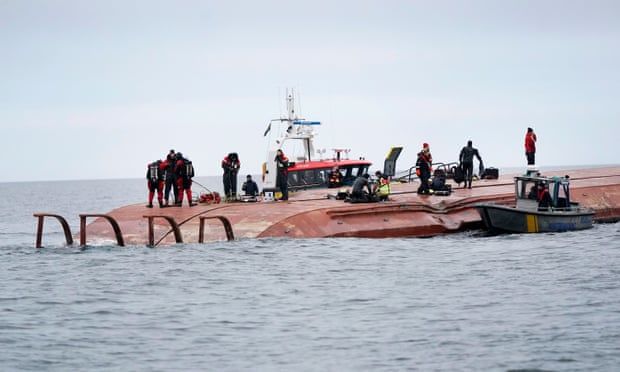 Inquiry launched into ‘drunkenness at sea’ after ships crash in Baltic

At least 11 boats, a spotter plane and a helicopter searched for the missing men for hours after the 3.30am collision in the Baltic Sea but eventually abandoned their efforts, Sweden’s maritime administration (SMA) said on Monday.

One of only two crew members onboard the Karin Høj, was later found dead inside the overturned barge after it had been towed to port, the Swedish public broadcaster SVT said, citing a police spokesperson. Officials said there was little hope the other had survived in waters that cold.

Two unnamed suspects have been detained, the Swedish public prosecutor’s office said, adding that the preliminary investigation into the collision was at an early stage and it would be making no further comment.

Jonatan Tholin, head of the preliminary Swedish investigation, said “additional criminal suspicions” had arisen, including “gross marine intoxication … and negligence”. Denmark’s meteorological institute said the fog was not particularly dense and conditions were not unusual for the time of year.

SMA spokesperson Jonas Franzen said the British vessel had lowered a small boat and “looked for people, and they heard screams from the water, but couldn’t find anyone”. Emma Valhem of the Swedish sea rescue association said the freezing water meant the situation “was critical from the start”.

The 55-metre Danish barge, which was not loaded, was sailing from Södertälje in Sweden to Nykøbing Falster in southern Denmark, while the Scot Carrier was en route from Hargshamn, north of Stockholm, to Montrose on Scotland’s east coast.

The Scot Carrier was operating under its own power and its crew were safe after the crash, authorities said. The ship’s owner, Scotline, said it could not comment on the collision, which happened between the Swedish city of Ystad and the Danish island of Bornholm, but was “assisting and complying” with local authorities as required.

Danish authorities said there was no sign that lifeboats or other emergency equipment had been used by the Karin Høj’s two-person crew, indicating the barge had capsized almost instantly. There was no sign of any major oil spillage.

There is particularly heavy maritime traffic in the waters around Sweden’s southern coast, as all ships going into the Baltic Sea from the Atlantic need to pass through the strait between Sweden and Denmark.
Add Comment