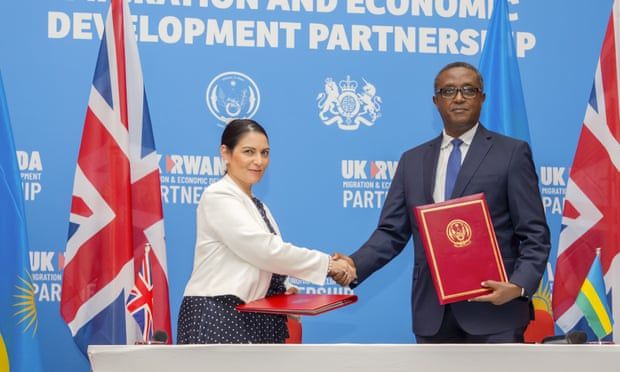 How red flags were brushed aside to push through Rwanda deal

Until the then home secretary Priti Patel and Rwanda’s foreign minister, Vincent Biruta, sat together at a table in Kigali on 14 April and signed a deal to send asylum seekers to the east African country, few thought the agreement would actually happen.

Rumours had swirled for months about the controversial plans but nothing had come of previous Home Office ideas, both confirmed and unconfirmed, to halt the growing number of asylum seekers arriving in the UK on small boats, including wave machines in the Channel and a policy to turn around dinghies.

While the government was undoubtedly under political pressure due to the huge rise in crossings – more than 25,000 so far this year – the policy to export asylum seekers from one of the world’s richest countries to one of the world’s poorer nations, 4,000 miles away, was so radical that no other country had attempted anything like it.

The five-day hearing into the way the home secretary handled asylum and human rights claims for Rwanda cases and key aspects of the removals policy opened on Monday and concluded on Friday.

When the deal was announced, details about how it would work were scant. But the high court case challenging various aspects of the policy has revealed what went on behind the scenes, thanks to the government’s disclosure of a mass of internal documents.

Although Sir James Eadie KC, representing the government, assured the court on Thursday that the scheme has specific safeguarding elements built into it and “there has been the most intensive investigation of that scheme imaginable”, little emerged in the documents to give comfort to critics.

What the documents show, beginning with a diplomatic telegram from the British high commissioner to Rwanda, dated 18 September 2020, are repeated concerns about the unsuitability of Rwanda as a destination country for asylum seekers. The high commissioner expressed alarm about a lack of freedom of speech and the disappearance of opponents of the country’s president, Paul Kagame.

As the plans developed, the criticisms from government officials multiplied: extrajudicial killings; the recruitment of refugees to conduct armed operations in neighbouring countries, including children aged 15-17 to fight across Rwanda’s border in the east of the Democratic Republic of the Congo; a red traffic-light rating in relation to human rights; and a clear recommendation made to the director general at the Home Office on 23 April 2021 not to pursue Rwanda as an option.

Rwanda was not on the shortlist of seven countries with which to further explore the plans. Indeed, it was on a separate list of 14 countries to not do a deal with.

But from April 2021, the then prime minister Boris Johnson, along with Patel, took an energetic interest in Rwanda, along with two unnamed countries. A disclosure from 1 April 2021 says: “The PM himself is chasing.” No 10 asked if only sending a small number of asylum seekers would change the “political calculus”. The answer from officials continued to be a loud “no”.

On 2 June 2021, Rwanda was not on a shortlist of six countries. On 27 July, a stark warning about Rwanda was issued due to “human rights concerns and reputational risk”. The disclosures do not explain what happened in the following 24 hours, but by 28 July, Rwanda had been prioritised.

The UN refugee agency, UNHCR, which has had a significant presence in Rwanda since the 1994 genocide, was not informed of the details of the deal until it was publicly announced on 14 April. 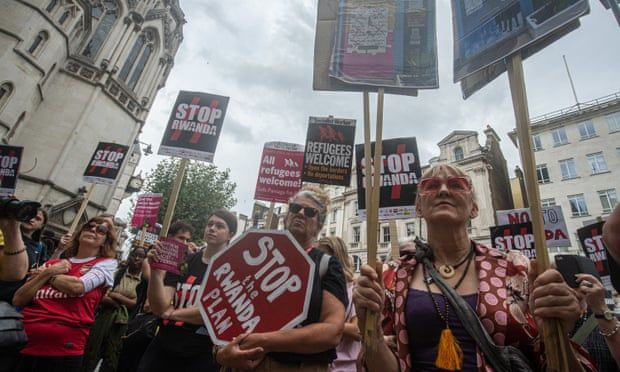 Protesters against the Rwanda policy gather outside the high court in London.

Disclosures show the agency’s opposition to offshore processing deals as “burden shifting rather than responsibility sharing” was well known by the government. It was decided not to brief UNHCR before the announcement because “engagement with UNHCR gives them more time to organise their campaign against these measures when they are announced”.

When the UNHCR found out about the deal, it raised concerns about refoulement – forcing a refugee or asylum seeker to return to a country or territory where they are likely to face persecution – and an underdeveloped system to process individual asylum claims.

The UNHCR provided evidence that almost all LGBTQ+ asylum seekers had left Rwanda due to an inability to progress their claims there and it identified a 100% refusal rate for Afghan, Syrian and Yemeni cases. Many of the people the Home Office wants to send to Rwanda come from these countries.

Further evidence of torture emerged, with disclosures stating that “techniques like mock execution, asphyxiation and electric shocks is routine and widespread in Rwanda”.

During the court hearing, Laura Dubinsky KC, acting for UNHCR, issued a stark warning to the court that the agency did not consider Rwanda to be a safe third country to send asylum seekers to.

“UNHCR does make an unequivocal warning,” she said, calling for an “embargo” on the scheme “because it will lead to a real risk of refoulement and breach of the [UN refugee] convention”.

Alongside a £120m payment of development money, Rwanda was paid a previously undisclosed £20m as an incentive to abide by the memorandum of understanding signed in April.

However, if Rwanda breaches the memorandum, it cannot be held to account by any court. It emerged in the case that while asylum seekers sent to Rwanda will receive food and accommodation, they will have to pay their own legal fees for the first two stages of the asylum process.

The two judges in the case, Lord Justice Lewis and Mr Justice Swift, are unlikely to hand down judgment for a couple of months as a related case by the charity Asylum Aid will be heard next month, followed by one judgment delivered for both cases.

At one point, as Eadie was providing assurances to the court about the safeguards put in place by the government, Lewis said: “Unless we are satisfied Rwanda is safe, it doesn’t really matter what the secretary of state has done.”

Some of the eight asylum seekers who are claimants in the high court action, alongside the charities Care4Calais and Detention Action, and the PCS union, were under the control of traffickers en route to the UK, so they did not have the freedom to claim asylum in other European countries they passed through, as Patel frequently urged asylum seekers to do. Some had learning difficulties and survived torture.

One of the those involved in the case, a Syrian man known only as AAA, said of Rwanda: “If I go there, I will end my life.”