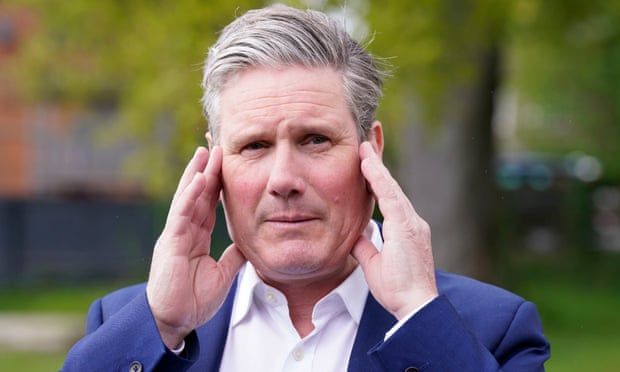 Analysis: Few outlets considered April 2021 event a story at the time. But then Partygate happened
If Keir Starmer is fined for a breach of lockdown rules, the person who would claim credit for bringing him down is the anti-lockdown campaigner Laurence Fox.

Fox, the former actor and leader of the niche Reclaim party, was the first person to widely share a 34-second grainy video showing the maskless Labour leader having a beer with one of his MPs after a day’s campaigning. In the background party activists can be seen eating curry, in what Labour has always insisted was a work environment.

The self-proclaimed vaccine sceptic – and ex-husband of Billie Piper – mockingly captioned his upload: “It would seem that the mask has already slipped for Keir Starmer. Don’t share widely. No one is perfect.”

The original footage was filmed on 30 April 2021 by a third-year student at the University of Durham. They anonymously told the student newspaper Palatinate that they happened to pass the building when they saw “something that I thought was an injustice and decided to film it because it made me angry”. The student said they felt Starmer was practising double standards but they were uncomfortable with recent coverage and “didn’t want to help Boris in any way”.

At that time, pubs and restaurants were legally allowed to serve groups of six people outdoors but most of the population was still under substantial restrictions on socialising and large indoor gatherings were banned.

The student shared the video with friends, and it was quickly forwarded to a wider audience, including anti-lockdown activists. Fox uploaded a copy at 8.42am the following morning to glee from his particular corner of anti-Labour, anti-lockdown Twitter.

Yet few mainstream outlets considered it a news story at the time, potentially because of Fox’s pariah status and the unclear provenance of the footage. The Sun on Sunday picked up on the clip and published a brief article on page 2 of its print edition – the traditional slot for political stories that are not expected to get widely read. Even fellow rightwing newspapers ignored it and the clip languished in relative obscurity for the rest of the year.

What changed was the rolling Partygate scandal that pre-occupied Westminster through December and January. Boris Johnson came under fire from his own MPs after it was alleged that officials at No 10 had been drinking and socialising throughout the darkest periods of the pandemic in 2020, while the rest of the country endured severe restrictions.

Starmer took a strong stance on Johnson’s rule-breaking, calling for the prime minister to resign when he was put under police investigation. At this point, some of the first outlets to revive interest in the old video were leftwing, anti-Starmer online news outlets such as Skwawkbox that had sprung up to support Jeremy Corbyn.

As the pressure mounted on Johnson, the Daily Mail put the Durham pictures on the front page of its 15 January print edition under the headline “Starmer the Covid party hypocrite”. But it was only after the prime minister and the chancellor, Rishi Sunak, were fined last month for breaching lockdown rules in Downing Street that rightwing newspapers put their full weight behind the story.

Nine months after the video was first reported, the Daily Mail and the Sun began publishing a series of articles, tracking down the driver who delivered the curry to the Labour party office and pushing for Durham constabulary to open an investigation.

The police’s recent announcement means the media pressure is now likely to increase further, with the BBC and other broadcast outlets swinging behind a story they could previously dismiss as an ideologically driven attack, but that they now see as a more straightforward tale about an ongoing police investigation.
#Boris Johnson  #Johnson  #vaccine  #Covid
Add Comment