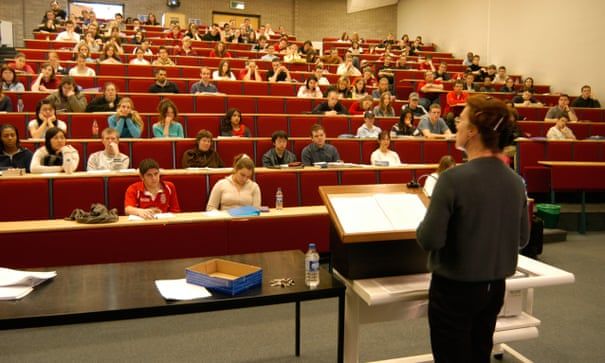 ‘Horrific’ cuts in pipeline for English universities and students

Treasury fights with No 10 over options to reduce student loan burden
Vice-chancellors in England say they are bracing for steep cuts in funding to be announced later this year, as the Treasury and No 10 battle over proposals to lower the government’s exposure to unpaid student loans, which are growing at about £10bn a year.

One vice-chancellor said the comprehensive spending review expected in the autumn was “looking horrific” for universities, with Downing Street and the Treasury competing over what to include in the government’s policy paper on funding, which is due to be published within the next two months.

The Treasury is concerned that adding more loans as part of Boris Johnson’s ‘lifetime skills guarantee’ – offering all adults four years’ worth of education or training – will add billions to the government’s exposure to unpaid student loans. Instead it wants to bear down on loans for undergraduates on university courses, forecast to reach £20bn annually within three years, to create room for the new adult loans.

The Treasury’s alarm follows its most recent post-pandemic forecasts showing a further surge in the government’s resource accounting and budgeting charge, known as the Rab charge. The charge calculates the present value of future student loan write-offs and interest subsidies that will eventually hit the public finances, now running higher than 50p for every pound loaned.

“The Treasury is now being driven by the Rab charge, without really looking hard at why the graduate labour market is struggling so much,” said one vice-chancellor.

Among the options discussed is a cut to the annual tuition fee, from £9,250 to £7,500, as suggested by the Augar review of tertiary funding two years ago. Other measures would increase the amount that graduates repay, by extending the repayment window from 30 years and lowering the income threshold for repayments from the current level of £27,295 a year.

Other options include limiting the number of university students eligible for loans each year. That could mean the introduction of minimum entry requirements based on GCSE grades, or the government reintroducing limits on student numbers. One option is capping the numbers on courses such as humanities or social sciences, or those deemed to be “low value”, while allowing uncapped recruitment for favoured subjects such as nursing or sciences, technology, engineering and maths (Stem).

Whitehall sources say No 10 is resisting the Treasury’s more extreme measures, as they and the Department for Education (DfE) jockey over the measures to be included for consultation ahead of the spending review.

“There’s quite a big fight going on about what’s going to go in [the policy paper],” one insider said. University leaders who spoke to the Guardian said there was little clarity so far about what the final outcome would be.

“We know something is coming and that it’s going to be bad. We just don’t know what it is yet,” said one vice-chancellor.

No 10 advisers argue that across-the-board tuition fee cuts will do greatest harm to universities that rely on tuition fees for the bulk of their income. That could financially destabilise universities in towns and cities across England where universities are leading local employers and sources of revival.

Tuition-fee cuts or number controls – which one vice-chancellor suggested could hurt institutions in northern England such as Teesside University in Middlesbrough or Durham University’s campus in Stockton – would run into opposition from Conservative MPs and politicians such as Ben Houchen, the popular Tees Valley mayor.

But even leaders of Russell Group universities, which receive substantial research funding, admit that tuition-fee cuts create “a very real risk” to their operations.

The depth of the impact would depend on what additional teaching subsidy the Treasury allowed for favoured subjects. The current £9,250 tuition fee – which has been eroded by inflation since it was set in 2017 – does not cover the full cost of teaching subjects such as health, sciences and engineering, which receive top-up teaching grants. Those favoured subjects would have their grants increased, while the DfE has already planned for cuts in the grants for creative arts and archaeology courses.

The increased grants would mean higher upfront costs for the Treasury and lower repayments from high-earning graduates. Currently about 20-30% of graduates are forecast to fully pay off their loans, meaning they would benefit from cuts to fees or interest charges.

The DfE’s involvement has been to seek new powers for the Office for Students (OfS), the higher education regulator, to punish universities and courses that fall below “minimum expectations”, without taking into account any differences that might affect those outcomes, such as the background of the students involved.

With finances already stretched by the pandemic, several universities have decided to pre-empt the government’s moves and set off a wave of course closures and staff redundancies.

In one case, London South Bank University’s managers told staff that below-average graduate outcomes could lead to the loss of its degree-awarding powers. Staff were warned: “LSBU must change these statistics as a matter of priority to avoid OfS sanctions.”
#Boris Johnson
Add Comment